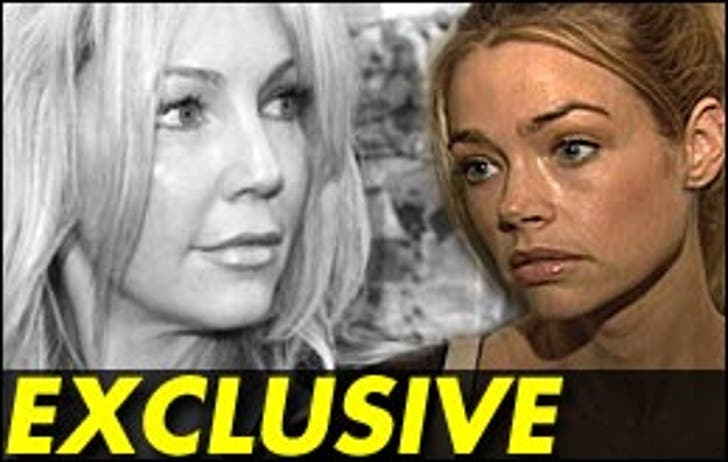 Denise Richards speaks out for the first time about her bitter divorce with Charlie Sheen. In an exclusive on-camera interview with TMZ's Managing Editor Harvey Levin, Richards says she feels hurt by her one-time good friend Heather Locklear.

Richards talks about her relationship with Locklear's estranged husband Richie Sambora and Locklear's reported anger over it.

And there's a new twist. Richards' interview comes amid new questions over the timing of Locklear's romance with David Spade. The Richards/Sheen Locklear/Sambora divorces have gripped Hollywood, and TMZ has the lowdown.

Denise Richards says Heather Locklear has betrayed her. In an exclusive interview with TMZ, Richards denies she was involved with Richie Sambora, the estranged husband of Locklear, before Locklear and Sambora split.

Richards says comments by Locklear and David Spade, who suggested Richards had back-stabbed Locklear, were a "betrayal."

"It is a betrayal because a lot of it isn't true and they know that and that's what's hard," Richards said. "I have to try and just stay focused on my kids and forget that part of it as difficult as it is."

Richards also tells TMZ that she stands by the allegations she has made against Sheen in their divorce. "I stand by it and it's sad that it's gotten to this," she says. "My focus is just getting my girls through this because it's very, very difficult and very sad."