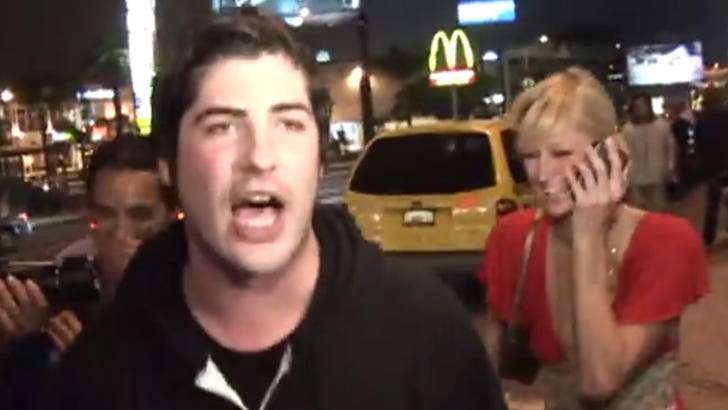 To say Paris Hilton and ne'er-do-well pal Brandon Davis hate Lindsay Lohan is one of the great Hollywood understatements of 2006.

Last night, as the pair club-hopped in LA, Davis unleashed a filthy torrent as Paris laughed with approval. Davis makes numerous sexual and hygenic comments, the likes of which you probably have never heard.

Davis, best known for his drunk driving arrest, at one point hurls a racial invective toward Lindsay's former boyfriend, Wilmer Valderrama, asking, "Is he in a mariachi band?"

The grandson of the late billionaire Marvin Davis at one point says of Lohan: "I think she's worth about seven million (dollars), which means she's really poor. It's disgusting. She lives in a motel."

As for everything else Davis said, TMZ cannot print it; we lost count of the number of bleeps.

By the end, it appears Paris prompts Davis' invectives by whispering something in his ear.

During the rant, Paris' publicist walks by her side, helpless and grim-faced. Paris seemed to enjoy Brandon's comments so much, she wanted to share them with her friends. You can see her hold up her cellphone as Mr. Filthymouth does his thing.

Update: 12:15PM ET: Mintz gave the following statement to TMZ. "The only thing I want to underscore is the person making the statements was not Paris Hilton," he says, "It is unfair to characterize Brandon's statements as being reflective of Paris' feelings about Lindsay. We're dealing with two different people. It was Brandon who was speaking, of course there are moments when Paris was laughing, but she never said anything. Brandon was speaking for himself not for her. Personally," he adds, "I found the incident unnecessary."

As for Paris egging Brandon on and holding up her cellphone, Mintz says: "Paris uses her cell phone as a defensive tool. Many times when you see her photographed in a crowd situation, she puts it up to her ear so she doesn't have to speak. In the cacophony and din of screaming, nobody could have had a telephone conversation. Reporters were asking her questions about Lindsay that she did not want to answer, so she put her cell phone up to her ear. Brandon was not speaking for Paris. Period."