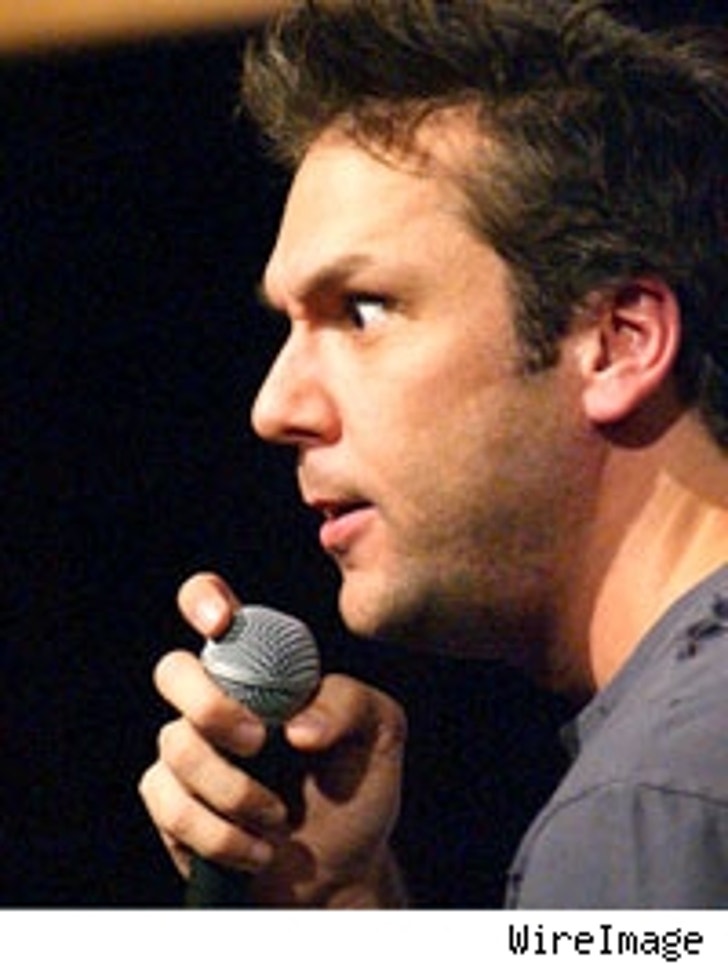 Dane Cook is one the hottest comedians working today. His fan following is extremely loyal; he has nearly 1.2 million friends on his MySpace page, nearly all of whom post pictures of themselves striking his trademark "Su-Fi" pose.

So when Dane Cook's official Web site sent around an email inviting fans to be part of the filming of the finale of Cook's new HBO show "Tourgasm," his fans responded en masse. What they were expecting was some kind of show... What they got was a lot of standing around, some water, a free poster and just a glimpse of their hero.

Fans were invited to the June 13th event via an email from Cook's management company, New Wave Entertainment. If they responded to the first email, they got a second email saying, "CONGRATULATIONS! You have been selected to be an on-camera guest for the last episode of Dane Cook's Tourgasm for HBO!!!" A third email, sent on the day of the event, gave fans the exact location of the event.

No details about what would happen once fans got there were given.

According to various fan reports on his personal Web site, DaneCook.com, fans were given various different colored wristbands and ushered around for about four hours. Then a helicopter, with Cook and the other comics from "Tourgasm," landed. They walked by the crowd and then spent, according to Internet reports, 15 minutes accepting "fake awards" on stage.

After they were done, according to a fan who emailed TMZ, the people with "white wristbands" (friends and family) were invited to the VIP area while everyone else was sent home - and given a free poster for their troubles.

According to other reports, Dane spent hours with fans in VIP area, but did not perform.

One fan on DaneCook.com seemed to sum up everyone's feelings best: "What sucks the MOST is he picked his most DEVOUT fans to screw. He could have posted on Craigslist or the Times or something and had the same turnout. But why would you go to SUCH great lengths to make your true fans overly excited about something ... and then let them down hardcore?"

Another echoed that sentiment, saying, "We thought, being devoted Dane Cook fans, that it would be something to remember for the rest of our lives. We'll that's true, but in the worst way."

Cook sent around an email to fans after the event, apologizing to his fans. It said, in part, "I am so sorry for the way the event went down. In their valiant effort to surprise me, my production team and HBO purposely kept me out of the loop about the details for the taping and as a result neglected the most important people involved in all of this ... MY FANS!"

The email also expressed an interest by Cook to make it up to fans with "a special show at a date to be determined."

In a message posted on DaneCook.com, Cook said, in part, "Most of the event was out of my control and I'm embarrassed and pissed at the way things went down ... I will DO MY BEST to make things right but realize that may not even matter to some people due to frustration ... I truly appreciate that you came and held up your end of the deal."