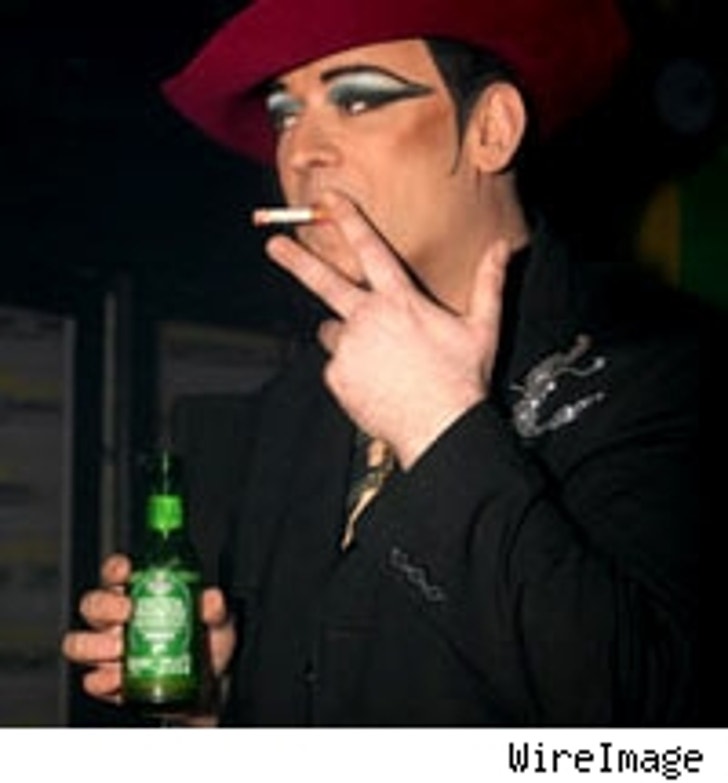 NEW YORK (AP) -- A clearly annoyed Manhattan judge issued an arrest warrant Friday for Boy George after the former Culture Club singer failed to appear in court to explain why he wants to change his sentence for falsely reporting a burglary.

Judge Anthony Ferrara also ridiculed the singer's suggestions for serving community service, which included a proposal to hold a fashion-and-makeup workshop. But he said he would not order an arrest until a June 26 hearing on whether Boy George violated the terms of his sentence.

The singer, whose real name is George O'Dowd, pleaded guilty in March to false reporting of a burglary at his Manhattan apartment, where police found cocaine.

Under his plea deal, O'Dowd was to enter a drug-treatment program in England and do five days of community service in Manhattan. He was also fined $1,000.

But the judge angrily complained that O'Dowd had not paid the fine and had never reported to the office that assigns community service work.

"I put people in jail who don't pay fines," the judge told O'Dowd's lawyer, Louis Freeman. "Why shouldn't I do that?" Freeman said he had told O'Dowd, who was in England, that he did not have to appear Friday but that he should be ready to fly to New York on a moment's notice. He said the singer would be present for his next court date.

Assistant District Attorney Craig Ortner called O'Dowd's absence "audacious" and told the judge he opposed any modification of the sentence. "The defendant got a good deal. He got a fair deal," Ortner said.

O'Dowd's drug woes reportedly led to the collapse of Culture Club, which scored the hit 1980s singles "Karma Chameleon" and "Do You Really Want to Hurt Me?"

His lawyer said O'Dowd hoped to do something more worthwhile than sweeping streets and sidewalks. "There's nothing wrong with that if that's part of his punishment, but it will turn into a media circus, and the press will be following him every day," Freeman said.

The judge said he understood the objection to street cleaning: "It's humiliation." However, he said, O'Dowd "got out from under a felony, and he took a (misdemeanor) deal that had an element of humiliation. And he doesn't serve himself well by not paying the fine. We know he has the means."