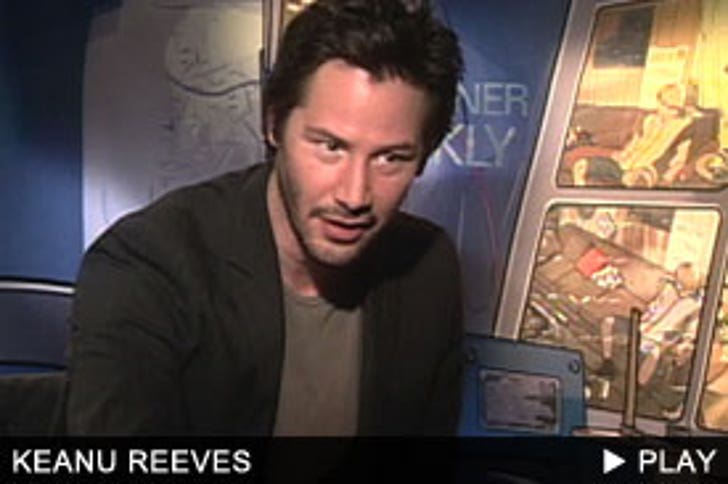 Even though years have passed since Keanu Reeve's hey day as a sex symbol, the dreamy actor is still thought of as something of a chick magnet. Rumors involving him and Claire Forlani are quickly dismissed by Keanu, who points out that Claire's "in a relationship". "We're friends" he says.

Another one of his friends is Winona Ryder, who Keanu has plenty of kind words for. Calling her an artist, Reeves points out that "she's been acting and in show business for over 20 years" and that "she's succeeded in a way... that no young actress has achieved".

In all, Keanu sticks up for the honor and integrity of both Forlani and Ryder with so much sincere chivalry that some women will surely wonder if they have a chance with this consummate gentleman, or if he's another one of Hollywood's confirmed bachelors. Reeves addresses this as well, admitting that if he had the chance to become a husband and father "it would be great".

Keanu is presently promoting "A Scanner Darkly," and it will be interesting to see if his charm and sex-appeal will come through as an animated character. The Richard Linkletter film is not like most animated films, where the actor is merely a voice attached to a drawn character. Like Linkletter's 2001 film "Waking Life", this movie utilizes an advanced form of roto-scoping, which means that the actors actually perform the scenes in front of a camera. Animators then take the footage and carefully replace the photography with dream-like animation. The result is quite unlike a Disney film, and more like watching real actors perform. This movie will be test of audience's reaction to such an unusual visual style.

The film is based on a novel by Phillip K. Dick, and won't be the first time Keanu has brought life to that author's work. The legendary sci-fi novelist also wrote "Johnny Mnemonic" and Reeves played that title character in 1995.