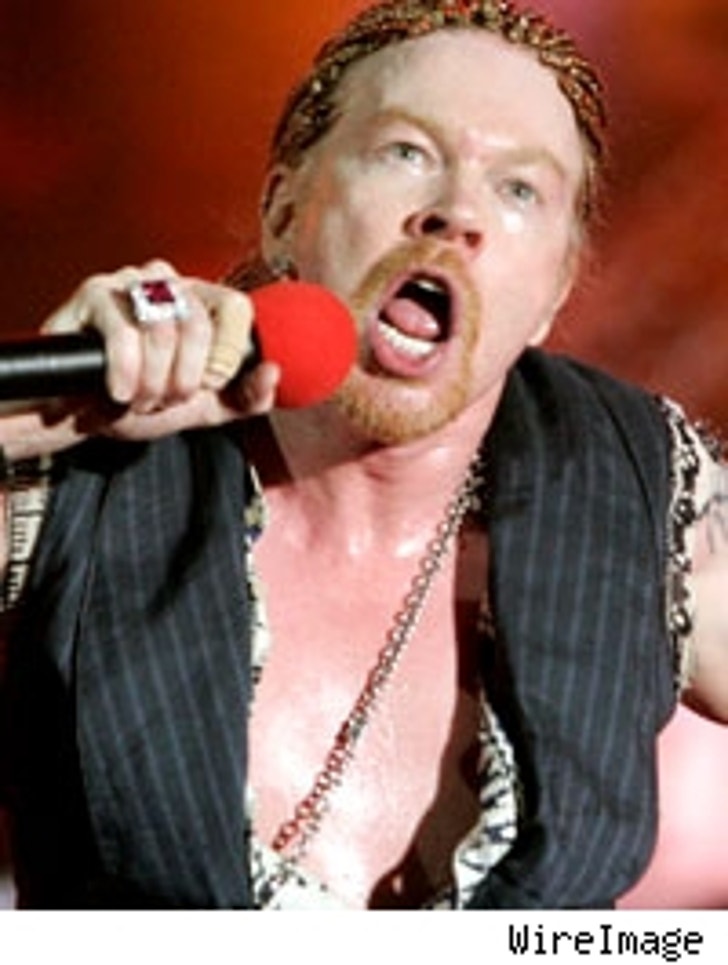 Axl Rose made headlines not too long ago for his now infamous spat with designer Tommy Hilfiger. Last week he scored major ink for his recent "scuffle" with a hotel security guard where he allegedly bit the guard on the leg. Axl's camp is speaking out to tell their side of the story saying the police mistreated Axl and that reports of the leg biting were overstated.

MTV.com is reporting that according to a statement from Rose's manager, Merck Mercuriadis, Swedish authorities "continually threatened us over a 12-hour period with between five days and three weeks incarceration without bail if Axl did not 'cooperate.' " Mercuriadis said fans should not take the police report - which had Rose arguing with a woman and hitting and biting a security guard who tried to break it up - at face value. He said Rose was basically "held for ransom" after being "accosted" by the security guard at the hotel and manhandled by the arresting officer, who caused him to lose a valuable bracelet. Mercuriadis also said Rose was held down by five police officers while in custody as a doctor tried to take blood to administer a drug test three separate times.

It's tough being Axl these days. But, in the rare "good news" out of the Guns 'N Roses camp these days, Axl did show off his nice guy side in New York before leaving for Europe. Axl was staying at Trump Tower and a street performing drummer was playing on the street below. The drumming kept Axl from getting some needed shut-eye so his rep went down to get the guy to go away. Money didn't work, but eventually the street performer convinced Axl's people to take his tape up to the singer. Amazingly, Axl sent word that the performer could open for Guns 'N Roses if he only went away. Axl kept his promise and for one night the street performer got his shot at the big stage. Very cool!