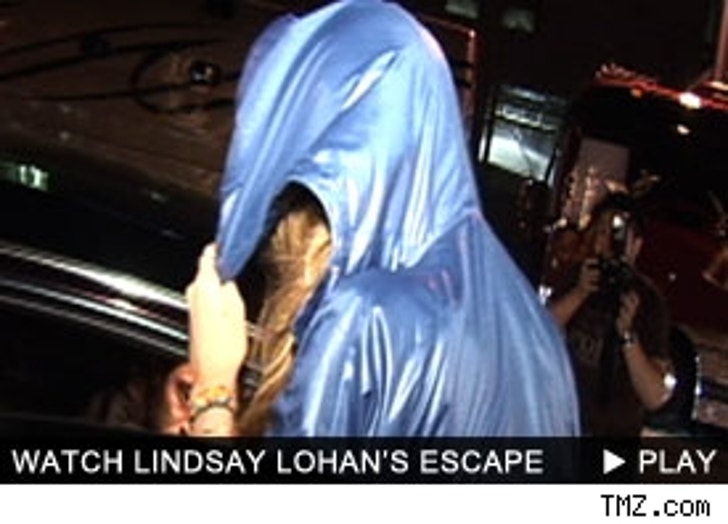 Lindsay Lohan pulled her patented "hood over the head" move as she left LA hotspot Guy's. While Lindsay's part in the escape from the barrage of paparazzi was going to plan, her co-horts need a class in "quick escape 101".

First thing you don't do is hit a photog with your car. Lindsay's new man, Hard Rock Hotel heir Harry Morton, love taps a photog with his Mercedes while trying to pull away. Morton then gets his car kicked by said photog. Hopefully they'll be able to buff that out.

Second once you're clear, you leave. Once they have a clear path the car takes off-- only to suddenly stop 20 feet later. A guy then walks up to the car and starts asking for $5. Did they not pay the valet? Someone keeps telling the guy that it is taken care of. Now the guy makes Lindsay get out of the car so he can get in the back seat. Why not have the driver get out so Lindsay can stay hidden? Total amateur.

Lastly while driving away, do not almost hit another car. After $5 man gets in the car, it screeches off the line just in time to nearly sideswipe a Volkswagen Bug. All in all, Lindsay really needs to train this new entourage.