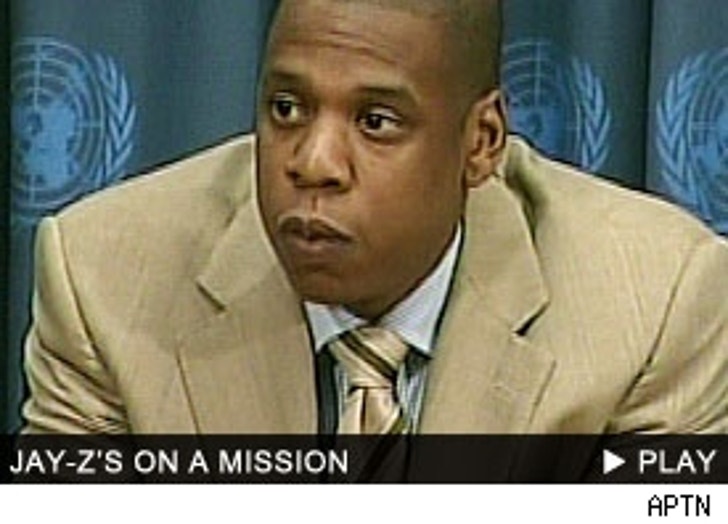 UNITED NATIONS (AP) -- Jay-Z boycotted premium champagne Cristal at his clubs after the brand's owner made some remarks he didn't like. Now the rap superstar has a new favorite drink: water.

Jay-Z, president of Def Jam Records, teamed up with the United Nations and MTV on Wednesday to get children involved in the fight against the worldwide water crisis. He cited statistics that 1.1 billion people live without clean drinking water and 2.6 billion lack proper sanitation.

"I figure that once I stumbled upon that, if the information was out and young people knew that these problems exist while we're having Poland Springs at Cipriani and things like that, that we'll get involved," said the 36-year-old rapper, referring to the high-class restaurant chain.

Jay-Z, whose real name is Shawn Carter, said he had been looking for a way to help people, and when he visited Africa on tour he was struck at how many of the world's poor lacked such a basic necessity.

"As I started looking around and looking at ways that I could become helpful, it started at the first thing -- water, something as simple as water," he said at a news conference at U.N. headquarters. "It took very little, very little to see these numbers."

MTV film crews will follow the rapper on his worldwide tour, which begins Sept. 9. "The Diary of Jay-Z: Water for Life" will feature first-person accounts of meetings with people around the world who lack water, MTV President Christina Norman said.

Jay-Z said he wants to build 1,000 "play pumps" in Africa by the time the tour is over. The device features a rudimentary merry-go-round that pumps water from a well into a storage tank as it spins.

He also hopes that children who learn about the crisis will tell their parents, who might be able to do something about it.

U.N. Secretary-General Kofi Annan recalled how President Kennedy once remarked that anyone who could solve the world's water problems would get two Nobel Prizes -- one for peace and one for science.

"Together, we may yet inspire a young viewer to take up President Kennedy's challenge, and claim both those Nobel Prizes," Annan said.