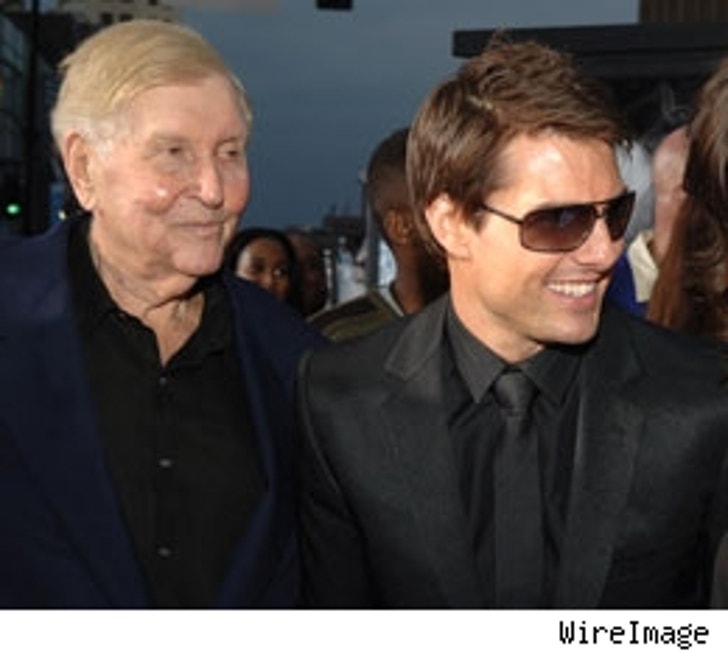 You could actually hear the incredulity in my boss' voice. He wasn't expressing shock that Tom Cruise had been ushered off the Paramount lot.

No. Not at all. The move had been expected for weeks. "The Hollywood Reporter" noting in June that the deal would expire on August 31st.. A month later, "Daily Variety" took the temperature of the studios vis-a-vis producer deals. The climate? Chilly.

What was so astonishing about Cruise's departure is that the head of Viacom came out and actually said what everyone in Hollywood already thinks, but -- until now -- couldn't afford to say: Tom Cruise is at least 51% nuts.

In an interview with the Wall Street Journal, Viacom chairman Sumner Redstone is quoted saying that "As much as we like him personally, we thought it was wrong to renew his deal," adding, "His recent conduct has not been acceptable to Paramount."

Belligerent comments about psychiatry from someone whose disrespect for the couch was already amply demonstrated on "Oprah"? This is what blows a gross player deal?

Hardly. It's what the public thinks of such behavior year in and year out. Normally, stars can bounce back from it - Russell Crowe's desire to reach out and touch a concierge with a phone hasn't immolated his career. But behavior plus time equals reputation. And as of early summer, Cruise's reputation for repeated oddball antics had sunk him at the polls -- plunging his approval ratings even lower than that of George W. Bush. And, keep in mind, the only war Tom declared was against the star of "Suddenly Susan."

"In the survey of 1,013 adults conducted during [Mission: Impossible: III's] first weekend in theaters, 35 percent registered a favorable opinion of Cruise, while 51 percent had an unfavorable opinion...That's a major turnaround from last year, when Cruise's previous film, "War of the Worlds," opened and his poll ratings were 58 percent favorable and 31 percent unfavorable."

With the way movies are financed, having a loose cannon gross player is doubly risky for the studio. Cruise is a first-dollar gross player, which means he makes his money back before the studio does. That's fine when you're the biggest and most beloved star in the world. Being first in line to get paid is another matter entirely when your reputation causes your movie to drop 60% after it's first weekend because you keep opening your pie-hole and saying the wrong thing at the wrong time.

On the face of it, it might seem odd that Redstone took the heat, when ostensibly Paramount chairman Brad Grey ought to have taken the bullet for his boss.

But look at it this way: By making the radioactive statement himself, Redstone frees up Grey to say he was "only following orders." That way, if Cruise manages to get his act together and regain his popularity with audiences, Paramount is free to make another movie with him without any recriminations between Grey and Cruise. i.e.,

"Tom, the old man is a bit of a nut. He doesn't take you seriously the way I do and always have." etc., etc.

It also frees Grey up to actually run the studio, rather than play defense on yet another controversial story. (Thanks to disgraced P.I. and wiretapper of the stars Anthony Pellicano, Grey has been plenty distracted of this year.)

And finally, despite JJ Abrams gamely trying to revive it, it appears that the "Mission: Impossible" franchise has run its course, having earned over $1.3 billion.

Or as George W. might have put it, "Mission: Accomplished."