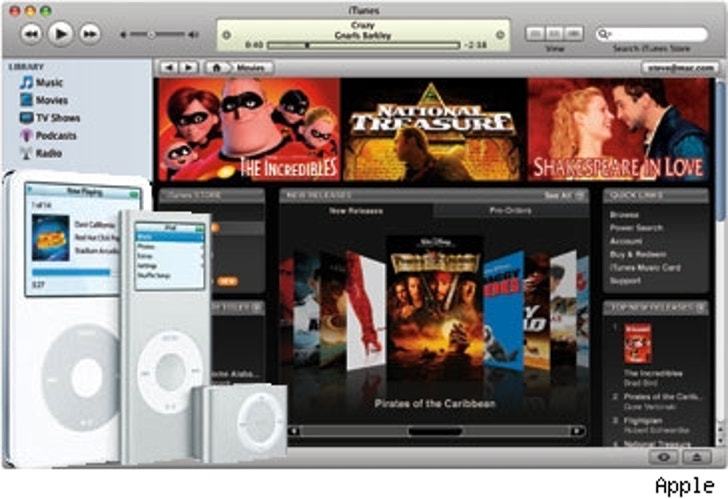 Jobs and his minions in Cupertino also updated the iPod to make use of the new movie store. The 30GB and 80GB models go for $249 and $349 respectively, and both models will now play games that are available on the iTunes music store for $4.99. The new iPods also have a search function for those hard-to-find Wham! tunes you just can't live without.

Jobs also announced that Apple shrunk the iPod Shuffle to a footprint that's barely bigger than a postage stamp, making it what he says is the world's smallest MP3 player. Sporting an aluminum exterior and being just half a cubic inch in volume, it's also the most "wearable" iPod ever at $79. (Just try to not lose it!)

The iPod Nano was given the iPod Mini treatement with multiple colors. It now comes in silver, pink, green, blue and dark, dark black, for all you goths out there. Smaller and lighter with a 24 hour battery life, the Nano is priced as follows: 2GB silver is $149, 4GB silver, pink, green and blue are $199 and the 8GB black is $249. The iPod and iPod Nano are available now, and the iPod Shuffle will ship in October.

Finally, Jobs had a surprise up his sleeve. Teasing attendees at the Moscone Center with his trademark "Just one more thing," he unveiled the iTV (a working title), a set-top box that allows you to watch your iTunes media directly on your television. With HDMI, component, and optical audio, it's ready to be attached to the latest HD flat screen TVs. Oh, and did we mention it's wireless? Expect this gizmo to hit the streets in first quarter of 2007 for the price of $299.

If the TMZ staff didn't have a wicked iTunes problem before, it's all over for us now.