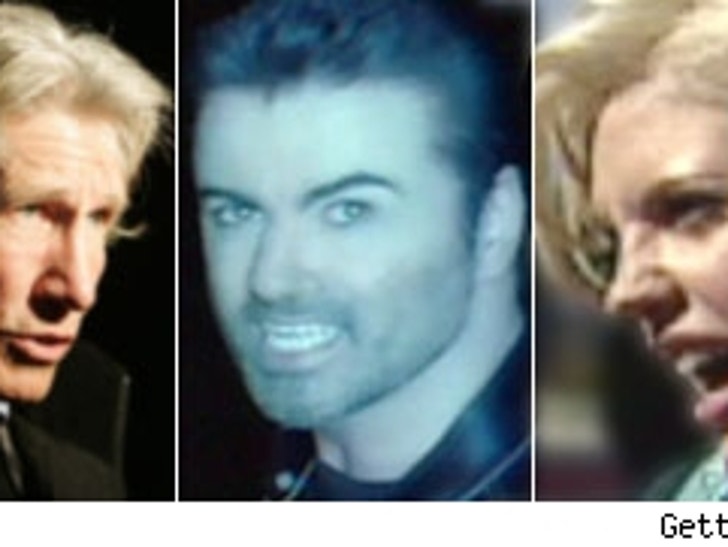 The last couple of weeks our friends over at the Drudge Report have highlighted stories on musicians taking on the Bush Administration over the war in Iraq. A week or so ago, Drudge highlighted Pink Floyd's Roger Waters' anti-Bush message painted on a flying pig and yesterday pushed the story about George Michael making some anti-Bush statements at a recent concert. Drudge smartly presents these items in a way that gets his readership, and allied media outlets, fired up and chatting about the appropriateness of celebrities speaking out on political issues. Their typical shtick is that celebrities are not qualified to speak out on these issues because they are simply entertainers and should stick to entertaining. Or, as Drudge peer Laura Ingraham once said "Shut Up, and Sing" (which is also the title of the recently released Dixie Chicks documentary). I happen to agree with the general proposition that celebrities should hush up about political issues, but I do so for a different reason than Ingraham and many other talking heads.

There is, and has been, a long campaign to equate "Hollywood" with "the left." And, not so much because there is some truth to the fact that more stars are active in causes that are equated with liberalism. The real aim here is to try to play on the public's perception of many celebrities as overpaid, spoiled brats. The pundits like Ingraham basically say that celebs can't be taken seriously because they are air headed imps that live a decadent "Hollywood" lifestyle. Of course, two of the major "stars" that consistently disagree with the current administration are John Mellencamp and Bruce Springsteen, both of whom are born and bred in small, blue collar towns quite far, both geographically and culturally, from LA LA land.

Obviously, celebrities aren't limited to disagreements with the right wing. Some see eye to eye on many issues. Charlton Heston and Ted Nugent (despite being the author of such "family friendly" lyrics as "Wang Dang Sweet Poon Tang") are darlings of the right for their stance on guns. And, it is interesting to note that over the years movie actor Ronald Reagan, singer/tv star Sonny Bono, and sports stars: Steve Largent, JC Watts, Jim Bunning and Tom Osborne all used their fame to win office as Republicans. These people actually made official government policy so you would think that those who say celebrities aren't qualified to speak out on issues would be outraged, right? But, consistency has never been a hallmark of the right wing's chattering class. (As a side note, there will no doubt be some who call me un-American for simply pointing this out. They'll claim, even though I've served our nation in the military and through civilian law enforcement at the federal level, that I "hate" America. Of course, calling someone un-American in an effort to silence them is about as un-American as you can get.).

So, even though there is little substance or logical consistency behind the "celebrities aren't qualified to speak out" argument, I do agree with the general notion that they should stay out of politics. However, as I alluded above, it's for different reasons. After all, I hope these same celeb bashers wouldn't tell a plumber to stick to plumbing and stay away from political discourse. Indeed, by their logic, everyone but politicians and the self-appointed political elite would be disqualified from having a "valid opinion." You only need to flip through the Sunday political talk shows for the briefest of glimpses to see the irony and absurdity of that proposition. No, I think musicians and other celebs should shut up for a different reason. When these stars speak out, via some crafty public relations work, the stars themselves become the debate instead of the issues. All we hear is" the Dixie Chicks hate America" or "Hollywood wants the terrorists to win." The real issues get swept under the rug and the focus is on bashing the celeb for speaking out.

After all, it has now been five years since the attacks of September 11, 2001. Yet, our government still allows our ports to be unsecure, allows the Taliban to resurface in Afghanistan, and now our intelligence agencies say going into Iraq has made terrorism worse. Yet, instead of debating the substance of these issues all some people want to talk about is how mean and nasty certain musicians are for disagreeing with the President. So yes, we need rock stars to shut up and sing so the focus can turn to more important matters, like why the current government so far has refused to implement the vast majority of recommendations laid out by the bi-partisan 9/11 Commission. Surely, that is more important than what some rock star has to say?