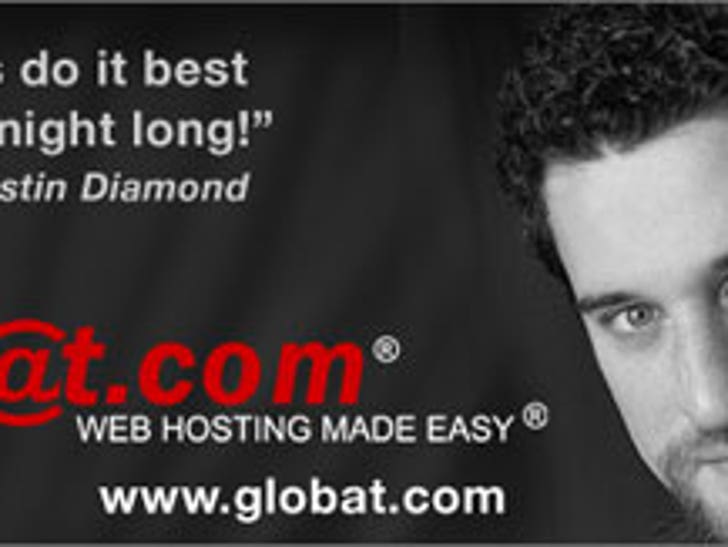 Dustin Diamond, aka Screech from "Saved by the Bell," may have known that a sex tape featuring him existed and that it was going to be released soon.

According to a source at Globat.com, the Web hosting company that recently hired him to be its spokesman, Screech's management told them that something "huge" was going to happen next week and that they were "lucky to have him."

This, of course, was not what the company had in mind.

The company says they are seriously concerned over the recent headlines and is contemplating its next steps. In a statement released to TMZ, Globat says: "We signed Dustin Diamond based on his persona as the recognizable lovable nerd. Through talks with his management, we knew they had something big planned -- but never expected this! We have not seen or received confirmation from Diamond's management of the alleged tape. We are reserving any judgment until further information is available."

Globat.com recently conducted a video and photo shoot with Diamond and was planning on a full launch of Diamond material on their website and sister site DefyingGravity.com. Currently, Globat.com features a picture next to the words, "Our nerds do it best and go all night long!" Another ad features Screech with his pants stuffed and the line, "Our nerds have the biggest packages!"

Diamond's reps tell TMZ: "At the time of the signing with Globat we were looking for easy ways to help with cross promotion. At the time there were three things that were drawing a lot of attention -- the first being the save the house campaign, the second being a televised Showtime comedy appearance and the third is an appearance on the ABC show, 'The Knights of Prosperity.'"