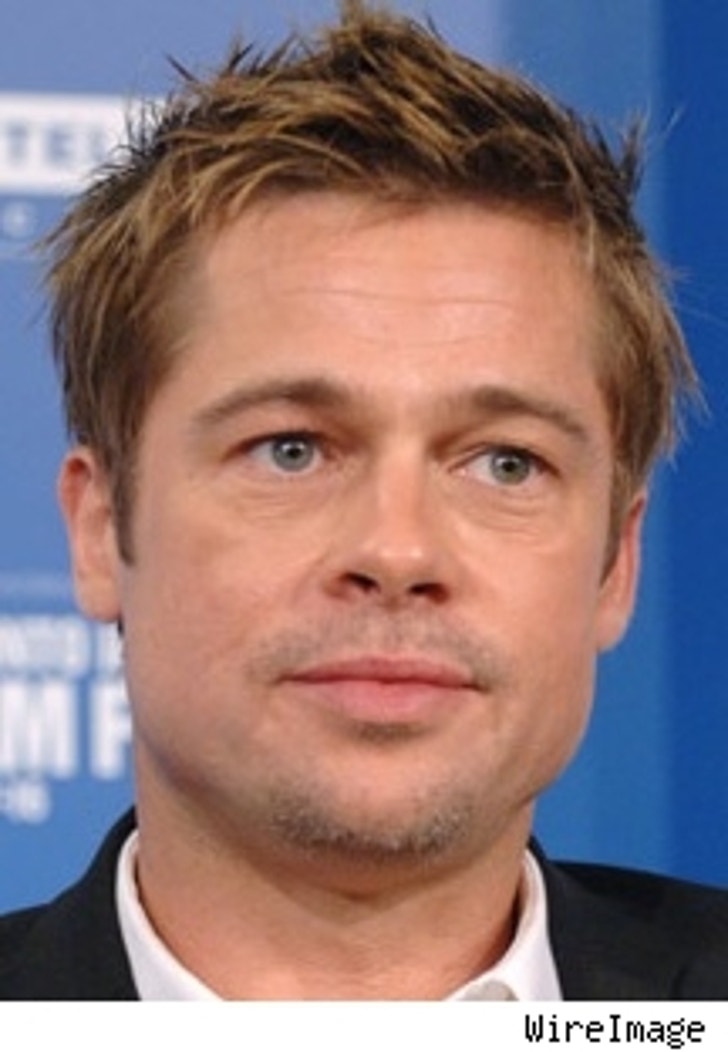 Could there be trouble in the oh-so-pretty paradise that is the universe of Brad Pitt and Angelina Jolie? According to a report this morning, a tussle over their next child is causing a rift between the stars.

"Brad wants another child, preferably a boy – but he wants a biological boy," says a Page Six source. "He is adamant and wants her to get pregnant again right away." Angelina, on the other hand, isn't on board with that plan – she's ready to adopt again, plus the pillow-lipped actress has a profoundly busy work schedule, with at least three films in the making. The couple's brood already includes two adopted children, Maddox and Zahara, and one biological kid, Shiloh Nouvel.

Anna Nicole: Married Or Not? Tabloids Duel Over Alleged Nuptials

It may ultimately come down to legal technicalities, but the tabloids are crossing pens today over whether or not Anna Nicole Smith and her lover-lawyer Howard K. Stern are actually married. Star magazine reported yesterday that the pair had gotten married on a catamaran anchored off Blackbeard's Cay in the Bahamas in the morning, just 18 days after the death of Smith's son Daniel.

But now, In Touch Weekly says that the pair are in fact not married, and that what went down on the boat was just a commitment ceremony, and wasn't a legal marriage. TrimSpa CEO Alex Goen, described by ITW as a "close friend" of the pair, says that they "do plan to have a proper ceremony in the future," but that yesterday they simply "declared how much they love each other in front of God."

Mark Burnett, the reality show mastermind who made being stranded on distant islands and being fired by Donald Trump actually seem appealing – and compelling TV – is aiming to put people quite literally under a spell on his latest series. Uber-producer Burnett is teaming up with world-renowned hypnotist Paul McKenna, who's plied his mind-bending trade on Elle Macpherson, David Bowie, Daryl Hannah and Naomi Campbell, among others, on a new series produced in conjunction with paraMedia inc. McKenna, author of last year's bestselling "Change Your Life in Seven Days," will help contestants deal with a panoply of issues – obesity, anger management, relationship woes, fear of heights – in the as-yet unnamed show. Let's face it: if the man can get Naomi Campbell to go to a calmer place, even for a little while, the world's already better for his techniques. Prospective hypnotees can apply to be on the show here.

Rap mogul Jay-Z is taking a little sabbatical from his job as CEO of Def Jam records to go on a mini-tour, and he started yesterday in London, becoming the first hip-hop artist to headline the Royal Albert Hall. According to Rush & Molloy, it was a star-studded affair, with his girlfriend Beyonce doing "Crazy in Love" and Chris Martin and Gwyneth Paltrow lending their voices as well. Nicole Kidman was in the audience ... Amanda Peet, who's going to marry screenwriter David Benioff this weekend, says she's having recurring nightmares about her wedding...reception. She told David Letterman that in her dreams she goes to the bathroom and when she comes back, "everyone is gone except for a few distant uncles of David's" ... The Los Angeles Times' Scott Collins reports that NBC's "Kidnapped" might be the first big flop of the fall TV season, coming in a distant third in its Wednesday 10 pm timeslot ... Legendary Hawaiian crooner Don Ho was released from the hospital after a two-week stay. The "Tiny Bubbles" singer had a new pacemaker installed, and last year had a procedure involving stem cells to strengthen his heart. No word on when he'll resume performing.