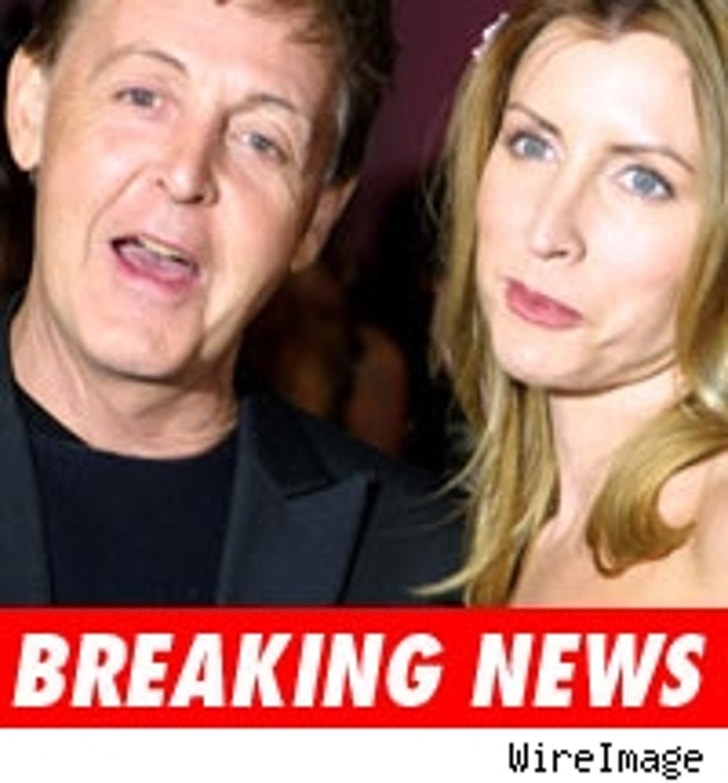 TMZ has obtained a transcript of the allegations Heather Mills has made in court documents against her estranged husband, Paul McCartney. TMZ obtained the transcript from the Evening Standard, a London newspaper that broke the story.

10.1 The petitioner has been physically violent towards the respondent.

10.2 The petitioner has behaved in a vindictive, punitive manner towards the respondent, on occasion thereby exposing her to risk.

10.3 In breach of his promises to the respondent made when she agreed to marry him, the petitioner continued to use illegal drugs, and to consume alcohol to excess, throughout the marriage, thereby causing the respondent distress.

11.2 On one occasion in Los Angeles in or about the end of October or beginning of November 2002, in the presence of others, the petitioner (who was drunk) loudly pointed out that the respondent was in a "bad mood." (The respondent was unhappy because hostile comments had been made about her on the Barbara Walters show). When the petitioner and respondent got back to their house they began to argue about the petitioner's behaviour towards the respondent. The petitioner grabbed the respondent by the neck and pushed her over a coffee table. He then went outside, and in his drunken state he fell down a hill, cutting his arm (which remains scarred to this day).

11.4 On the same occasion, and following the concert, in a fit of pique because the respondent refused to go to the after-show party and instead dined privately at a restaurant with her sister and her personal female bodyguard, the petitioner directed the female bodyguard to abandon the respondent, leaving her exposed to the attentions of the hordes of fans (500,000 attending a free concert) in Rome at that time. At the end of the meal, the respondent was forced to take a 30-minute walk back to the hotel, no taxi being available and the car driven by the female bodyguard having been withdrawn from her use by the petitioner.

11.5 In Long Island in August 2003 the respondent asked the petitioner if he had been smoking marijuana. He became very angry, yelled at her, grabbed her neck and started choking her.

11.17 The respondent was delivered of her daughter by Caesarean section and was very tired after the birth. Despite this, the petitioner forced her to accompany him everywhere having no regard to her emotional or physical (and especially, her disability) needs. Indeed in this connection some two and a half years later (22 April 2006), shortly after the respondent's revision amputation surgery, she was forced to crawl on her hands and knees up aeroplane steps because they were not wide enough to take her wheelchair. The petitioner had assured the respondent that he had taken care of her disability needs in connection with thee trip (which he compelled her to take with him), but in fact he had not troubled to do so.

11.18 The petitioner often told the respondent when she was pregnant that he did not want her to breast-feed their child, making on occasion the comment "they are my breasts" and on another occasion, "I don't want a mouthful of breast milk." Notwithstanding this, the respondent did breast-feed Beatrice until, after six weeks, the petitioner's constant interrupting of her when breast-feeding (often in the presence of a midwife) had become so intolerable to her that she gave up. This made her feel very miserable and demoralised.

11.19 On 19 November 2005, the petitioner required the respondent to defer an essential and once-cancelled operation on her leg for two months because it would have interfered with his holiday plans.

11.21 The petitioner refused to allow the respondent to get out of bed before he was ready to get up in the morning even though she would wake up early and wished to use the time for essential physiotherapy for her leg and to attend to emails and administrative tasks before the staff arrived or their child woke up.

11.24 The respondent often needs to go to the bathroom during the night, when he prosthetic limb is not fitted and so has to crawl to the bathroom on her hands and knees. This causes calluses and scrapes on her knees. She asked the petitioner if she could buy an antique bedpan to keep under the bed and use at night if necessary (whilst he was asleep) so as to avoid her having to struggle. The petitioner objected vociferously, saying that it would be like being in "an old woman's home."

11.25 Throughout the marriage, the petitioner refused to allow the respondent to use his beautiful spare office in New York, on the floor beneath their apartment, in a building owned by the petitioner; he told her that he did not want her to have an office in the same building. This was notwithstanding that she wanted to work on charity matters during Beatrice's two-hour nap and also be near to Beatrice in case she woke up. Using the office in the apartment block would also have meant that the respondent could have created a creche area in part of the office for Beatrice to play in for part of the time. The respondent could not understand the petitioner's refusal as he allowed his staff to work in the spare office if necessary, but he remained firm in his view. At the end of September or the beginning of October 2005, the petitioner reluctantly agreed to provide he with alternative office space in the city but in the even insisted that she sue and office that was far too small for any sensible purpose and was 20 minutes' walk away, which meant the respondent would have to leave Beatrice behind during her nap. When the respondent went to view it, she was chased by paparazzi, and was so demoralised by the experience she never used the office. The petitioner called her "an ungrateful bitch" in front of their driver when she explained why the office was not right for her. The petitioner made his position known in front of other people, including staff, which caused the respondent to feel insignificant and humiliated.

11.28 On Wednesday 26 April 2006, at about 8pm, the respondent asked the petitioner not to leave her alone with Beatrice at the Cabin (because it is isolated in the middle of a forest). She had just had surgery on her leg (a revision amputation), was in a wheelchair, and was anxious about her ability to cope by herself. Notwithstanding this, he walked off. The respondent then telephoned the petitioner, and asked him to return. The petitioner mocked her please, mimicking the voice of a nagging spouse, and refused to return. (Later, she alleges, she) pulled him, staggering, towards the ground-floor bathroom, undressed him, ran the bath and helped him into it. She then phoned the petitioner's psychiatrist for advice and he told her not to attempt to move him (she might otherwise "do herself an injury"), to get a duvet and two pillows, to empty the bath of water, cover him, and leave hi m there. The respondent thereupon dragged herself upstairs, on her hands and knees, she was unable to wear a prosthetic leg as the wound from the surgery had not yet healed), and brought back down the duvet and pillows. She found that the petitioner had vomited on himself. She rinsed him off, and (worried that he might choke if he vomited again in the night, unattended), she got him out of the bath, dried him, and dragged him upstairs to bed. At that time, the respondent also had a broken plate in her pelvis, and she was in agony; she also feared the exertions would cause the stitches from her pelvic scar revision operation to burst.

11.29 On Thursday 27 April 2006 the respondent knew that the petitioner would be too hungover to help her with Beatrice and due to her own incapacity as a result of the recent operation, she had to call the babysitter to ask if she could come to help at 7.45am in getting Beatrice into the car and to the nursery. The respondent went with the babysitter to drop Beatrice at the nursery and collect her later that day. When she returned, the petitioner had woken up and tried to make a joke of the incident the night before. The respondent appeased him, as she reared what would happen otherwise. That evening the petitioner drank very little (a half bottle of wine) and went to bed. The following day, Friday 28 April 2006, the petitioner wen to London but said he would be back in time to help the respondent put Beatrice to bed. He did not arrive back at her bedtime, even though he know the respondent could not cope on her own. The respondent had to ask a friend to help put Beatrice to bed. At 10pm the petitioner returned home staggering drunk and slurring his words, demanding his dinner. The respondent stated that it was on the stove but that she would not be cooking for him again, as he had no respect for her. The petitioner called her "a nag" and went to bed. That evening the respondent realised the marriage had irretrievably broken down and left, crawling on her hands and knees whilst dragging her wheelchair, crutches and basic personal possessions to the car.