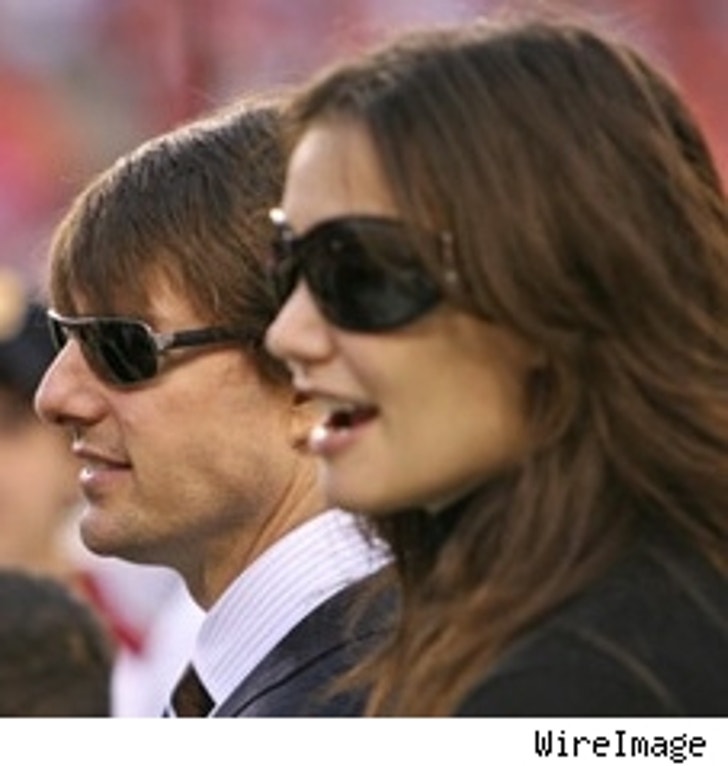 Contrary to reports that they were going to get hitched at George Clooney's Lake Como villa this month, Tom Cruise and Katie Holmes will apparently be tying the knot next month, though Italy, in fact, will be the venue. According to Us Weekly (via MSNBC), the long-gestating wedding will not in fact be happening at the palatial villa Clooney owns, which you may remember from "Ocean's Twelve. "No weddings have taken place at [Clooney's] villa and no weddings are scheduled to take place there," says Clooney's rep.

But it seems that Katie and Tom "both want everything to be right," says an Us source. "They needed more time." In fact, Holmes' new BFF Victoria Beckham flew with her on Oct. 7 from Paris to Italy to lend a hand with the planning. Cruise's rep is "not denying" the new date or location, though he's done the same thing with every other date and location, all of which have turned out to be false.

Rock's Mama to Cracker Barrel: "Oh No You Didn't!"

Comedian Chris Rock's mother Rose is going to demonstrate today outside a Cracker Barrel restaurant in South Carolina after the wait staff, she says, ignored her – and she's roped in the Rev. Al Sharpton to help spread the word, report Rush & Molloy. Mrs. Rock alleges that she and her daughter – the only black people in the restaurant -- had been seated for more than 30 minutes in the Murrels Inlet, S.C. outpost of the popular chain and that no one took her order. The manager then tried to placate the pair with free meals, but, by then, says Mrs. Rock, whose various exploits are fictionalized on her son's sitcom "Everybody Hates Chris," "Neither of us wanted to eat." Cracker Barrel says it's investigating the matter and that it does not "tolerate any form of discrimination." Mrs. Rock plans to sue the chain with Sharpton's help.

Nicky Hilton and Kevin Connolly broke up yesterday after a two-year relationship, and, according to Life and Style, the final moments may have come during an angry cell phone call between the pair. "Nicky was fighting over the phone with Kevin," says an L&S spy. "She screamed into her phone, cursed, and said, 'I hate you!' Then she got dead silent and snapped her phone shut." Subsequent attempts by Connolly to reach his now ex-girlfriend, who reports say suspected he was cheating on her with another girl, were unsuccessful.

Party Favors: Whitney Officially Files for Divorce ... Trump Gets His Own Cartoon ... Lindsay Wants to Be Married by 30

Whitney Houston officially filed divorce papers in Orange County Superior Court, a month after filing for legal separation, said Whitney's rep. Previously, Houston had asked for custody of her daughter with Brown; no word on the details of the filing this morning ... As though the man needed to be more of a caricature of himself, the pilot for a cartoon show starring Donald Trump is nearing completion, says the New York Post. The show will apparently be produced by the publisher of the tycoon's magazine ... Lindsay Lohan tells InStyle magazine (via People) in its November issue that she wants to be married before she's 30, and that she wants to have her Oscar as well by then. And she apparently has had enough of shacking up at the Chateau Marmont: "I need a place to call home, to feel it's mine."