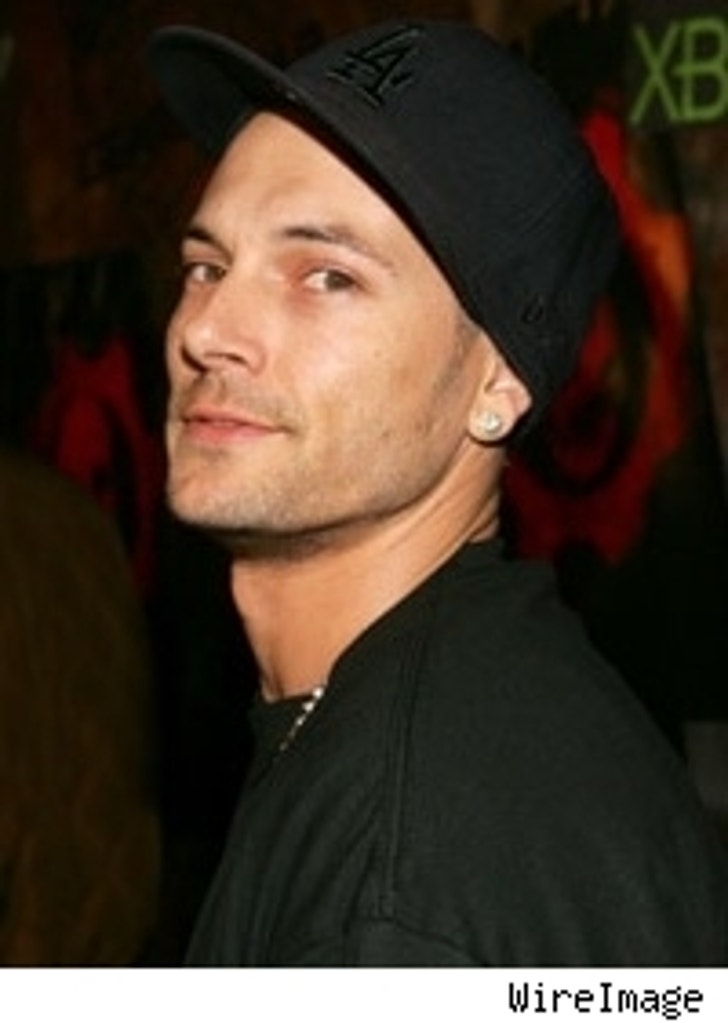 Kevin Federline thinks he's very underestimated – more underestimated, in fact, than anyone else out there. And K-Fed's so secure in his manhood that he can go out and buy wife Britney's tampons without a hint of embarrassment.

The aspiring rapper, whose album "Playing with Fire" drops next Tuesday (calm yourselves), tells Entertainment Weekly (via MSNBC) that he is "the most talked-about [person] of anyone over the last couple of years," a claim that, for better or worse, isn't terribly far from the truth. And when asked to name the most underrated performer in rap, K-Fed apparently gave it about 12 seconds of thought, and then said, "Me."

And he also shared his feelings about feminine-hygiene-shopping with the mag. "I used to be embarrassed to go to the store and buy tampons, but that's past tense," said Federline. "Once you make it through that, then you're good."

That wacky Kazakhi journalist Borat might be skewering unwitting Americans today, but just as Borat gets ready to hit theaters, it emerges that his alter-ego Sacha Baron Cohen will be assuming a new character for his next movie – that uber-gay Austrian fashionista Bruno. Page Six reports that the Bruno movie will start shooting next year, and that the catwalk-gawkers of New York will want to beware of Bruno next February during Fashion Week.

For those of you who haven't tittered along to the character on Cohen's "Da Ali G Show," Bruno's targets are typically insufferably self-absorbed fashion folk who end up laying bare their own considerable pretensions. Of course, two of the most memorable Bruno segments involve a pack of frat-boys on spring break and a rabidly homophobic minister whom Bruno invites to "take a walk on the brown side."

Former 'NSYNC star Lance Bass and his boyfriend Reichen Lehmkuhl have been the target of threats from, as Lehmkuhl puts it, "people who do not want me to be so public and expose what is going on in the military." Lehmkuhl recently published a book about keeping his sexual identity secret while serving in the Air Force, and since then has had to "be very protective," as he tells "Inside Edition." Lehmkuhl adds that he and Bass have forwarded threats, which aren't specified, to private security personnel and have even informed the FBI about some of the more serious menaces. "Everything is being covered so we feel safe."

Tom Freston got tossed out of the executive suite at Viacom this summer by Sumner Redstone, and, to add insult to injury, colleagues and friends gave Freston a proper roasting at the Pierre Hotel in New York yesterday. News Corp. president Peter Chernin, for instance, said, as Rush & Molloy recall, "I can only imagine how tough it must have been for Tom to be screwed over by a guy [Redstone] so old that he had to take a little blue pill to do it." MTV CEO Judy McGrath, Stephen Colbert, BET chief Debra Lee and others got their jibes in as well.

Charlize Theron's next starring role, says Variety, will be in an indie drama called "Ferris Wheel," where she'll act with Woody Harrelson, Dennis Hopper and others. It's about an 11-year-old girl's struggle to come to terms with her mother's abandonment ... Pete Townshend stormed out of Howard Stern's radio show before his appearance after he heard Stern talking about his child-porn issues and, most unforgivably says Page Six, referring to Townshend's girlfriend as "Yoko" ... NFL quarterback and former Paris Hilton paramour Matt Leinart has welcomed a son with USC basketball player Brynn Cameron, according to People. Cole Cameron Leinart is the couple's first child.