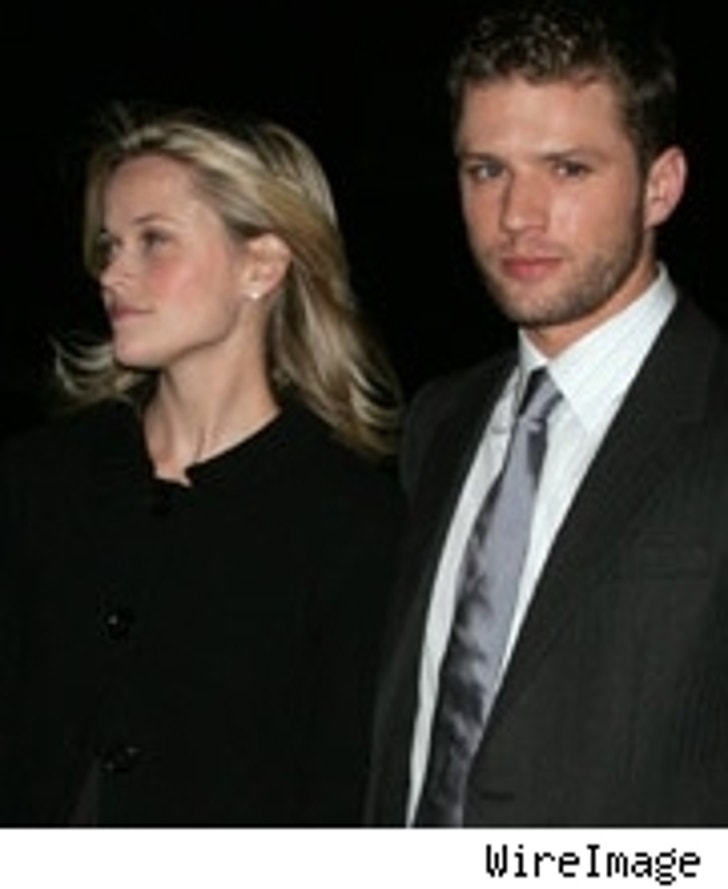 Reese Witherspoon and Ryan Phillippe may have parted company, but any bitterness seems to be in check.

TMZ broke the story Monday that the couple is separating and that Reese has already hooked up with prominent celebrity divorce lawyer Robert Kaufmann. Sources tell TMZ that the decision to split was made weeks ago but that their overriding concern before it became public was to protect their two children. Reese and Ryan were all too aware of the media onslaught that would be triggered by the split. One connected source calls their relationship "civilized" at the moment.

No doubt Hollywood took notice of the nuclear divorce between David Hasselhoff and Pamela Bach and the apparent collateral damage it did to their two children. TMZ is told that the problems in the Witherspoon-Phillippe relationship were "cumulative" and that no one incident triggered its demise.

That wacky ol' Mr. Redstone isn't finished hurling invective at Tom Cruise, and he definitely isn't sorry about his public humiliation of the "Mission: Impossible" star when he booted him and his production company off the Paramount lot this summer. "The explosion was good," says Viacom overlord Sumner to Vanity Fair magazine (via Page Six). "It sent a message to the rest of the world that the time of the big star getting all this money is over." What's more, Redstone says that it was indeed his much-younger wife Paula that got him thinking about giving Cruise the axe. Paula, says Redstone, "like women everywhere, had come to hate him ... He just didn't turn one [woman] off. He turned off all women, and a lot of men." Redstone adds that Cruise probably cost the studio $100 - $150 million because of his couch-jumping antics, and that was just on the third "M:I" alone.

Look out Lindsay! Keira Knightley's going to be pelting your house with machine gun fire and a hand grenade – in your next movie together, that is. Variety reports that the freckled phenom has joined the cast of "The Best Time of Our Lives," the true story of the relationships between Welsh poet Dylan Thomas, his wife Caitlin (played by Lindsay), his childhood friend Vera Phillips (Knightley) and Phillips' eventual husband. The plot centers around an incident in which, like most childhood friends tend to do, Phillips and Killick unloaded on Dylan and Caitlin's house with a machine gun and other weaponry. It's Lohan's next project after "Bobby," which opens this fall, and "Georgia Rule."

The suddenly ubiquitous Ivanka Trump has a new guy, and, no, he doesn't ride a bike for a living. Page Six tells us that it's "That '70s Show" star Topher Grace, and that the pair spent Ivanka's 25th birthday at Las Vegas' Pure with the curtains closed around their table for a full half-hour, after canoodling on the balcony during dinner at Social House with friends including Wilmer Valderrama. The newly ensconced couple "never left each other's sides" all night.

Shanna Moakler's going through a lot – an impending divorce from estranged husband Travis Barker, getting booted off "Dancing With The Stars" – but she's still managed to lose most of the baby weight she put on after she had her third child, Alabama, late last year, as Celebrity Baby Blog's Danielle Friedland tells us. She hasn't exactly lost the evidence of her pregnancies entirely, though; she admits that she still has stretch marks, and that those little blemishes as well as her C-section scar are usually airbrushed out of photos. "Our babies are worth it," says Moakler.

Mick Jagger played Bill Clinton's 60th birthday concert at the Beacon Theater Sunday night, and he wasn't shy about poking fun at the former Prez and talking up his wife's political ambitions. "I'd like to welcome President Clinton," said Mick to the crowd, deadpan, according to Rush & Molloy. "And I see she's brought her husband ... Kenny G is the best golfer amongst musicians, says Golf Digest, with his better-than-par handicap. The curly-tressed horn-blower beat out such musical-golfing luminaries as Vince Gill, Bob Dylan (#63 on Golf Digest's list), and, um, Snoop Dogg (#44) ... Oscar-winning director is on board to make a biopic of Latin American revolutionary Che Guevara, says Variety, and he's got so much material apparently that he's going to make two films. Benicio Del Toro will play Guevara.