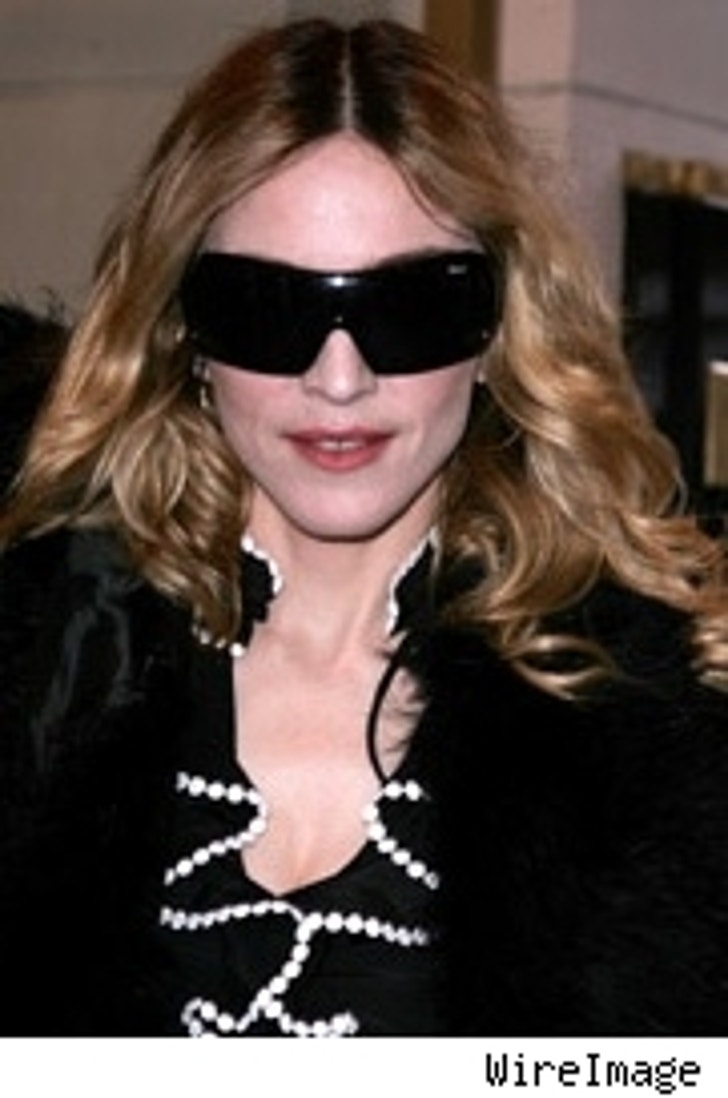 Madonna may be trying to save the African children, but she's definitely not looking out for New York pedestrians.The Material Mama and her drivers, one of whom is a retired cop whose brother is a state senator, have, according to Page Six, been breaking just about every traffic rule in existence -- going through red lights, making illegal U-turns, "burning rubber on major thoroughfares," and generally causing traffic havoc all over town.

In fact, a Post reporter says that she witnessed Madge's entourage running 40 red lights in just four days. She's been on a relentless tour of the city's talk shows to defend her controversial adoption of little baby David. One of the drivers, who goes by the name Abel, explained, "Some days she gets in back and says, 'Abel, I don't want to be followed' - and I know what to do." Abel adds, indiscreetly, "She enjoys this. She likes it when we do bad things." The Post did not have a response from Madonna's reps at press time.

Shanna to Travis: I Quit This Bitch

To celebrate her split from Travis Barker, Shanna Moakler threw herself a much hyped "divorce party" in Las Vegas at the Bellagio's Light club. The couple, which has been airing their dirty laundry on MySpace, filed for divorce in August. According to People, the highlight of the night was a three-tiered cake with a knife-wielding bride on top and a bloody groom at the bottom.

"I'm really doing it ... to have closure and celebrate being single again and start a new chapter in my life," Moakler says about the party. "I don't have any regrets about doing it. At the end of the day, this isn't the worst thing in my life. People go through it every day. This is how I'm showing the world that divorce is okay. It doesn't have to be the end of your life."

Aussies gave Kylie Minogue a warm welcome when she touched down in Sydney today. The pop princess says she's excited about hitting the road to finish up her Showgirl tour, which was postponed last year after she found out she had breast cancer. Kylie was so happy to be home that The Sydney Morning Herald spotted her at the airport jumping around and clapping her hands. "I feel really inspired, more than I have for quite a while," she says. "I'm not a year out of recovery and I'm recording and doing photo shoots ... I've hardly stopped." Her comeback performance is set for Nov. 11.

Actions speak louder than words for Jackie Chan, who admits that speaking English is sometimes hard for him. On his website, Chan says he's often frustrated with the dialogue on the set of "Rush Hour 3" and feels his roles are limited because he can't quite grasp the English language. "To me, action scenes are so easy, but dialogue scenes drive me crazy. The directors and producers want me to speak everything perfectly," he says. "Sometimes when a word is in the past tense or plural, I get confused. It is hard to remember lengthy dialogue and still sound natural."

A striptease by Gerard Butler injured Hilary Swank while filming "P.S. I Love You" in New York. During the steamy scene, a source tells People that Butler's suspenders got tangled and snapped, hitting the actress in the face. Filming was stopped and Swank got stitched up. Production is set to resume on Monday. ... Lindsay Lohan, Ellen Burstyn and Ann-Margret have signed on for the big screen version of Tennessee William's "The Loss of a Teardrop Diamond." Production should begin next year ... Mel Brooks says David Hasselhoff will star in a Vegas production of "The Producers" starting in February