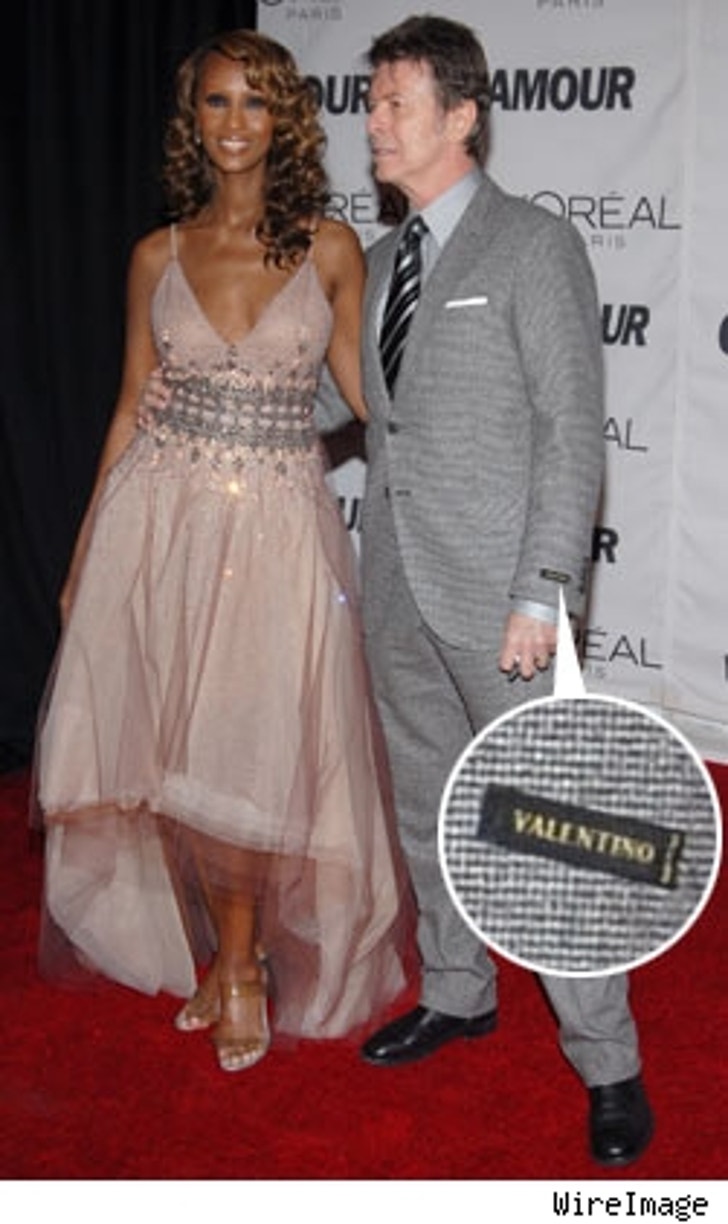 Rock icon David Bowie committed a minor fashion faux pas when he strode onto the scene at Glamour magazine's Women of the Year awards. No, he didn't wear anything that would garner TMZ "You Might Want to Rethink..." honors. Indeed, he looked quite debonair in a fancy Valentino suit. The slight problem for fashionistas is that Mr. Bowie left the tag on the sleeve for all to see. GQ style editor Adam Rapoport says visible labels are a no-no: "It's a definite fashion don't. It's not like the Lacoste crocodile or the Polo pony. You would never, ever walk out of a Valentino store with a label on the outside of your jacket." See kids, you learn something new every day. Somehow I don't think this little gaffe will put David on the un-fashionable list.

One thing never out of fashion is David's music. Bowie stays in touch with the changing musical times by scouring the young turks in the industry to bless them with his seal of approval. Bowie made our friends at Warner Brothers records quite happy when he picked the Secret Machines as one his favorite new bands. Bowie even interviewed the band for his BowieNet site (I got to interview them too!) and put them on his podcast saying he'd backed the band since their first record in 2004. Continuing his trendsetting ways, Bowie has also tapped TV on the Radio as a favorite up and coming act. Further cementing his credibility among the younger set, Bowie is proud of his portrait, recently rendered by My Chemical Romance singer Gerard Way, for the NME 2006 Rock and Roll Yearbook. All this intermingling with rock's next generation is sure to help sales of Bowie classics that are being reissued in the coming months. By March of next year, nearly his entire catalog will be re-released, including must-haves like "The Man Who Saved The World" and "Tin Machine."

Bowie is also participating in "The Black Ball," a fundraiser for "Keep A Child Alive," which provides assistance for HIV and AIDS patients, focusing on infected children and their families in Africa and the developing world. The Black Ball is in New York City this Thursday night and is hosted by Alicia Keys and Bowie's wife, the ever fashionable Iman. The concert is $250 a ticket, but if you've got the big bucks, you can hobnob with the stars at the ball. $1,500 will get you a seat at a VIP table for dinner, pre-dinner cocktail party, premium seats at the concert where Bowie, Keys and others will perform, plus entry to the after-party. If you can afford it, it's for a good cause. But, if you go, be sure to check your duds for exposed labels -- you don't want to be scoffed at by the fashion police!