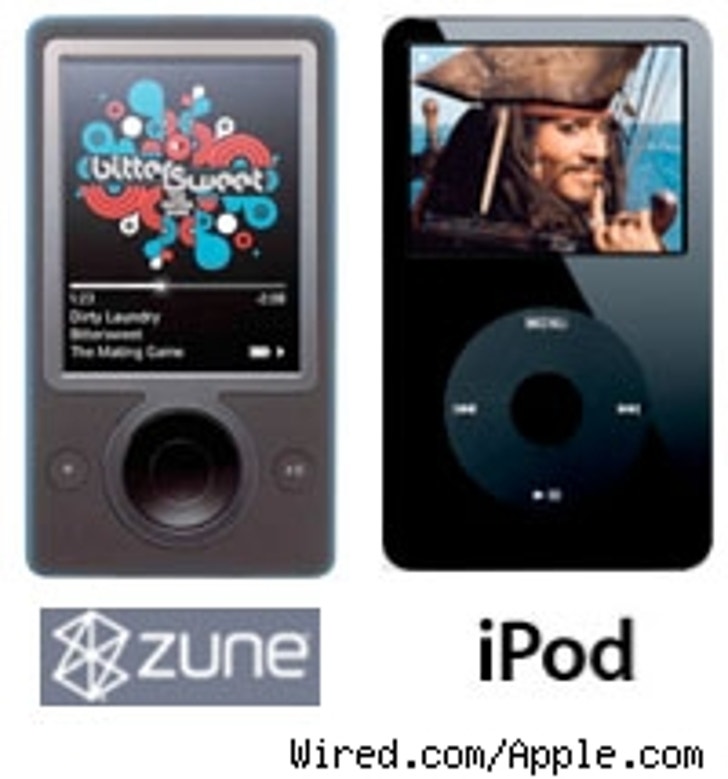 Very few products have dominated the landscape the way the Apple iPod has. The personal music player market is raking in about $4 billion a year, of which iPod has a very large chunk. Coupled with iTunes, it has virtually danced its way through a few years of competition-free dominance. Now comes the anticipated challenge from someone with the bucks to go against the market leader. Microsoft. Yep, the behemoth finds itself in the unfamiliar role of underdog in this face off.

Microsoft launched its Zune device this week with some significant fanfare. The Seattle giant hooked up with the Secret Machines, Queens of the Stone Age, Red Hot Chili Peppers, rapper T.I. and others, throwing concert "launch parties" around the country. Chairman Bill Gates himself strode onstage at the Seattle gig to give away one of the devices to a lucky concertgoer. In a world where the iPod has such vast saturation, Zune needed some hoopla to get some attention.

The concerts were a smart move in an attempt to gain some rock "street cred," particularly by using some hip bands like QUOTSA and the Secret Machines. The "taking it straight to the people" approach included utilizing music bloggers to get the word out. Zune ads started popping up in top music blogs last month, and Microsoft shrewdly invited bloggers to the launch parties -- although not all the bloggers it wooed are impressed with the new toy. Maybe that's why they've started their own Zune blog?

Microsoft faces an uphill battle to penetrate the iPod's market share, particularly among folks who've amassed a large iTunes library. For example, when you install your Zune software, an option will appear to allow you to import your iTunes library. But, a Microsoft rep tells TMZ that he questions the legality of transferring songs on your computer (that were purchased from iTunes) over to Zune device. Beyond those types of questions, there is the "comfort" factor people have with exisiting devices, and of course, iPod has huge name recognition and brand loyalty. I'm one of those people that has even adopted "iPod" as a generic term for all mp3 players. A five year head start by Apple will make Microsoft's race to catch up a difficult one. Then again, nobody expected these guys to dominate the computer software world the first time they faced long odds against established players. The "mp3 player wars" will be fun to watch, and hopefully, consumers will benefit from the competition. Right now, both devices are priced at $249. Will we see some price wars in the coming months? Count on it!