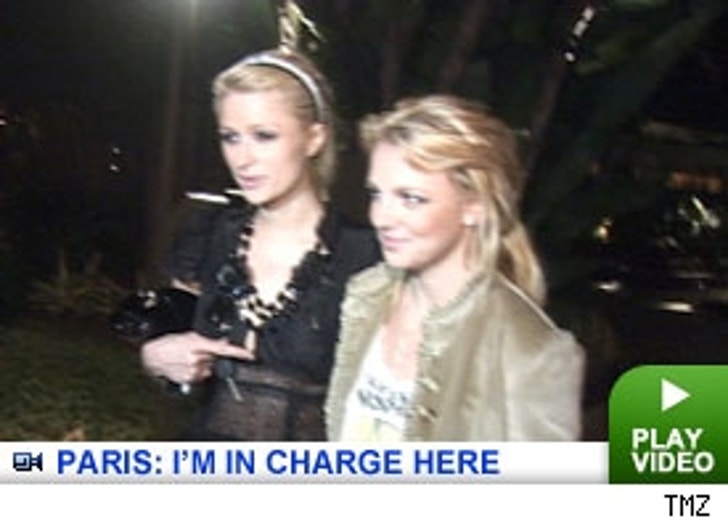 It's both delicious and diabolical, and it's now official: Paris Hilton's new pet project is none other than ... Britney Spears.

Paris and Brit have been painting L.A. and Las Vegas all shades of red over the past couple of weeks, but according to Paris' rep, Elliott Mintz, it's more than just a passing fancy. He tells TMZ that the two are "really forming a bond" and that they're "becoming like sisters." Mintz says that the 24-year-old Spears "looks up to" the 25-year-old Paris and that she's "extremely grateful" that Paris has taken her under her wing. Britney's new post-K-Fed look -- the barely-there skirts, the cleavage-baring tops -- has been "inspired" by Paris, says Mintz. We'd be thrilled if Paris could just get Britney to spit out her gum once in a while.

Brit and Paris are now comfortably ensconced at Britney's house in Malibu, so they can have more quality time while Britney looks after her two boys. Paris acted like a seasoned pro as she maneuvered Brit through the paparazzi at a Hollywood Hills party last night.

If you thought that a Hilton-Spears alliance was going to rule the world, just wait for this triple threat: Britney, Paris ... and Lindsay? Downplaying reports of a bitchfight between Lindsay Lohan and Paris on Saturday night, Mintz tells us that the three women have, in fact, created an alliance. "What I've observed is that we have three extraordinarily powerful women who generate a tremendous amount of attention, money, and adulation," says Mintz, "and they're tired of other people trying to ride on their coattails and creating false dramas."