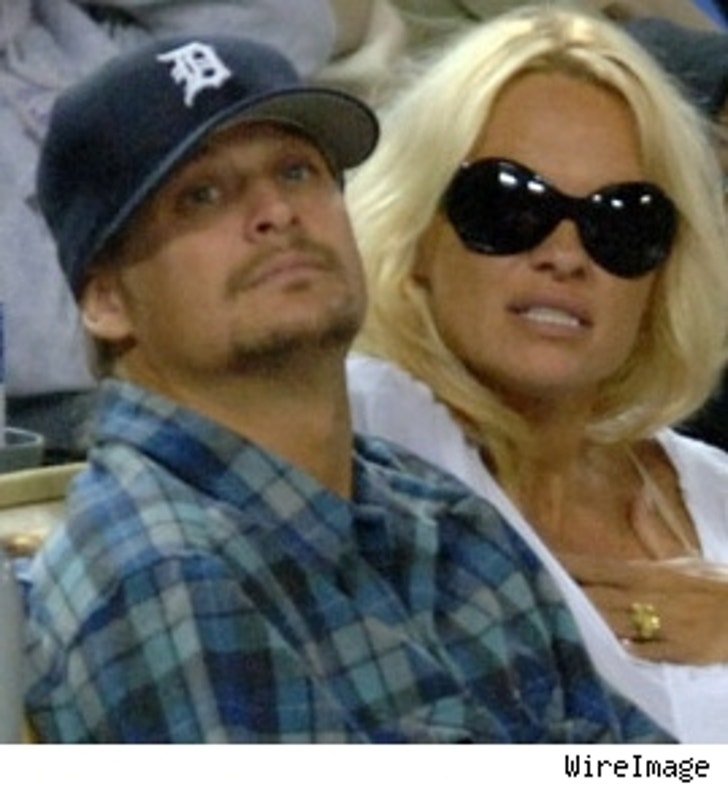 Pam Anderson and Kid Rock's short-lived marriage was doomed by Rock's "male insecurity and major anger issues," says a friend of Pam's – and it seems that Borat, of all people, might've been the final goofy straw.

As TMZ first reported, both Rock (real name: Bob Ritchie) and Anderson filed for divorce yesterday. And, according to a source in Page Six, the couple went to a screening of "Borat" at a Beverly Hills home two weeks ago, and Rock didn't like the movie one bit, screaming at Pam, "You're nothing but a whore! You're a slut! How could you do that movie?" in front of the assembled crowd after the film was shown. (Anderson plays the object of Borat's obsession in the film.)

And since that night, says the Post's source, "it has been icicles between them." Pam left her Malibu home Sunday with her sons and decamped to Shutters on the Beach hotel in Santa Monica until Rock takes his things and vacates the property. She posted a terse statement on her website yesterday reading, in part, "Unfortunately impossible." No word from Rock's rep on the incident.

She spent most of the Thanksgiving holiday away from her kids, and now Britney Spears is slacking off from the studio as well. Though she was working late into the night at Sony Studios earlier this month in New York, Britney has been missing recording sessions of late because of her Paris Hilton-inspired nightcrawling. "The label [Jive Records] is very worried," says a source to Page Six. Britney has been telling pals, apparently, "I gave birth for 2 ½ years, and now I want to party." What's more, the pop tartlet tried to get Christina Aguilera's manager, Irving Azoff, to help create her new album and resurrect her career, but after she only offered him a 5 percent fee, Azoff balked. According to a rep, "[Britney] is not scheduled to record in L.A., and she never went to Irving."

One of teendom's more visible couples – actress Hilary Duff and Joel Madden of "Good Charlotte" – have officially called it quits. The Chicago Tribune reported that Madden, during a guest DJ appearance at a club in the Windy City, talked about being a single guy, telling clubgoers that Duff had broken up with him ten days earlier and that their age difference (he's 27, she's 19) caused problems. Today, Star magazine confirms the split with his band's manager, who says, "Joel is, at present, single." No word yet from Duff's camp.

Burnett Touched by Engagement to Downey

Reality show uber-producer Mark Burnett and actress Roma Downey are engaged, according to their rep. Burnett proposed to Downey over Thanksgiving on a trip to Mexico. "They have never been happier," said publicist Jim Dowd. Added Burnett, "I have found my angel." (Awww.) Downey was the star of the long-running CBS series "Touched by an Angel," and Burnett is the producer of "Survivor," "The Apprenctice" and the recent "Gold Rush."

Party Favors: Could Bruno Be Nixed for Baron Cohen? ... OJ Getting Offers from Nets ... Erik Estrada Tries to Be Real Cop

All the publicity (good and bad) that "Borat" has generated could make it difficult for Sacha Baron Cohen to make his next movie, which features him as a flamboyantly gay Austrian fashionista, Bruno. The Los Angeles Times investigates the problems that Borat has caused for Bruno, including the fact that Baron Cohen's cover might now be permanently blown ... OJ Simpson is being hounded by networks for yet another "blockbuster" interview, says Rush & Molloy. What's more, there are hours and hours of tape, brokered by agent David Hans Schmidt, that might surface, which could provide a confession (yeah, right) ... Erik Estrada, who never learned how to use a gun properly the whole time he was on "CHiPs," will now be doing so. He joins La Toya Jackson, Jack Osbourne, and other reality-show vets in Muncie, Ind., as they train to be officers in a new unscripted series for CBS.