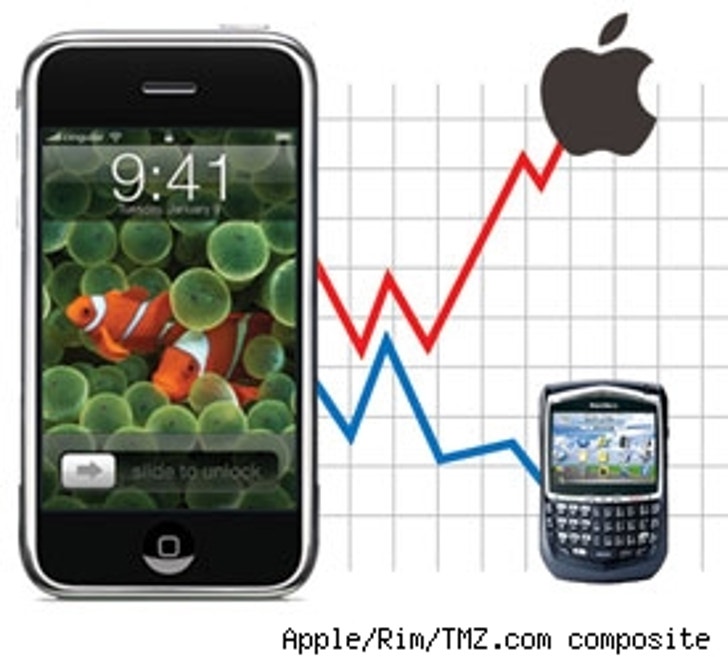 Enjoy the spotlight Apple -- while it lasts. Apple, as you don't need me to tell you, introduced the $499 iPhone yesterday, and in so doing sent Apple's share price soaring by six percent. Close-competitor BlackBerry stock plunging by even more. To put that in perspective for you: Apple, Inc. is now worth $6 billion more than it was 48 hours ago, and the iPhone won't even be available until June.

I can see why. I recently steeled myself and managed to program -- slowly, painfully -- a few new numbers into my Motorola RAZR V3 cell phone. With its agonizingly slow web connection and painfully awkward text-messaging, being thin really is about its only redeeming quality. Fortunately, as Nicole Richie can tell you, being extremely thin is often enough to keep your name in the papers. When the RAZR came out in July 2004, it stopped traffic; Aircraft-grade aluminum, chemically-etched keypad numbers, all in a package less than 14 millimeters thick. Back then, we all agreed that cell phones were evil, and while they all more or less sucked for anything beside making a call, they were necessary. The least they could be was elegantly unobtrusive.

Steve Job's latest invention aims to contravene those assumptions. In addition to being a phone, it's got a multi-touch screen, scrolling navigation and a 2-megapixel camera, as well as the iPod music and video player. Daily Variety even put news of Apple's new, albeit limited, movie download agreement with Paramount Pictures on its front page the other day. (If you think your monthly cell phone bill is scary now, wait until it includes the price of the six movies, ten shows and eighteen songs you bought with it.)

More, I don't know about you, but my cell phone has taken so many beatings from me, it's considering taking out a restraining order. In contrast, I treat the iPod my wife gave to me like it's a Fabergé egg. I shudder to think what will happen to Apple if the five or six hundred dollar iPhone proves to be as delicate as it is expensive. Rather than use it to order 4,000 lattes, Jobs would have impressed me and the CES audience far more if he'd simply dropped his iPhone to the floor, as I've done a million times, then nonchalantly continued his prank call to Starbucks.

One other thing that leaves me head-scratching: Why would a guy so meticulous about what tech geeks refer to as "the user experience" throw-in with a bunch of chuckleheads like the phone companies? Ultimately, a phone is judged by its provider, and as anyone who's called directory assistance can tell you, the phone companies will deny that a restaurant you just drove by even exists -- especially when you need the number in a hurry.

It appears Wall Street's analysts share the same worries; this summer we'll see if Jobs can revolutionize chewing the fat the way he did spinning the wax.