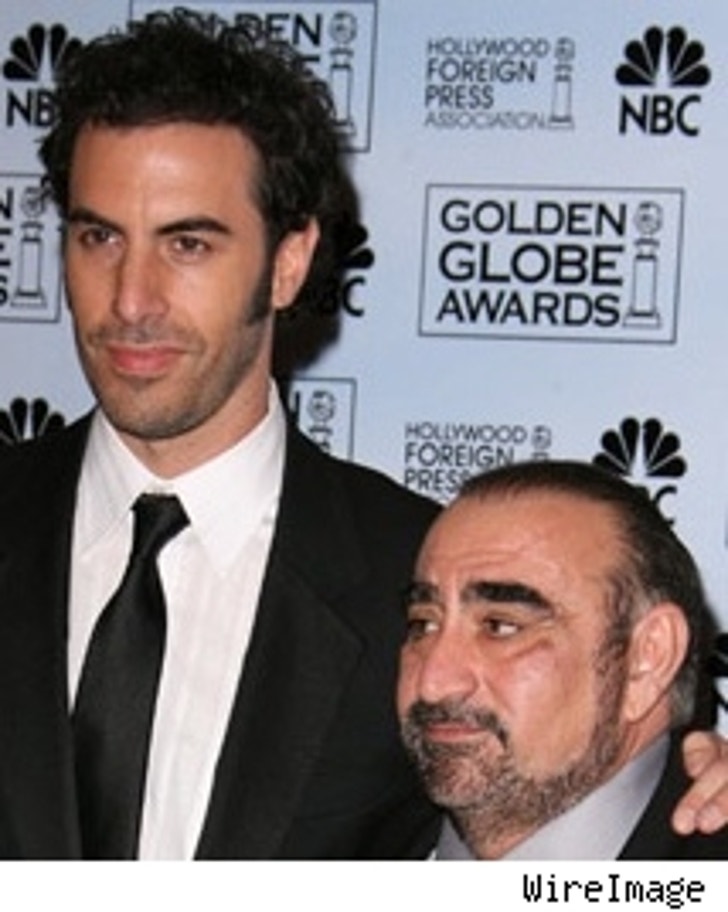 The fat guy who played Borat's naked wrestling partner wasn't even invited to the Golden Globes, but ended up being the butt of the best joke of the night – literally.

Actor Ken Davitian, as FOX News reports, wasn't invited to Monday night's ceremony, but wandered into the Beverly Hilton ballroom earlier in the day and was given a ticket by a member of the Hollywood Foreign Press. Later, Davitian met up with Sacha Baron Cohen backstage, and the pair worked up the side-splitting routine that Cohen unleashed during his acceptance speech, in which Sacha described the ordeal of being face-to-face with Davitian's "dark side" (i.e., his anus and testicles) and the malodorous horror of a certain "rancid pocket."

Brad and Angelina have had enough of Tinseltown – so they're taking their brood out to New Orleans. Angelina Jolie confirmed at the Golden Globes that the couple have ditched Hollywood for the Big Easy, buying a $3.5 million, six-bedroom house in the French Quarter and will be sending their kids to the local school. "We're really looking forward to it," said Jolie to Us Weekly. Apparently, Jolie is trying her best to "befriend" local, "normal," moms so she can "do things with the kids."

Cynics say that the Katrina-ravaged city is just another stop on the Brangelina humanitarian-aid tour, though Papa Brad is in fact filming his latest movie, "The Curious Case of Benjamin Button" in the area.

Look out, Jessica Biel: Hell hath no fury like Cameron Diaz scorned. At least so it appeared at a post-Golden Globes party Monday night after Diaz spotted Timberlake chatting up Biel. Page Six sources say that Cameron "screamed" at Biel at an InStyle party at the Beverly Hilton. One insider characterized the newly single Diaz to the Post as "desperate." Meanwhile, other observers report that Justin and his mom had to make a quick getaway from the InStyle party after Cameron began to get "too clingy."

Supermodel Gisele Bundchen could be Super Bowl MVP Tom Brady's latest tight end, if Boston Herald sources are to be believed. The Brazilian bombshell was spotted waiting outside the New England Patriots' locker room after Sunday's game. Brady just broke up with actress Bridget Moynihan, and Gisele has called Tom "pretty cute." ... Martin Scorsese's Globe-winning "The Departed" might not be shown in China because it mentions a fictional Chinese plan to buy military equipment, according to the AP. The filmmakers wouldn't change the plot point upon request ... The Beckhams have decided to pass on a Spanish-style mansion in L.A., even though it was once owned by none other than Lionel Richie. According to UK papers, the $15 million pad was too small for Posh.