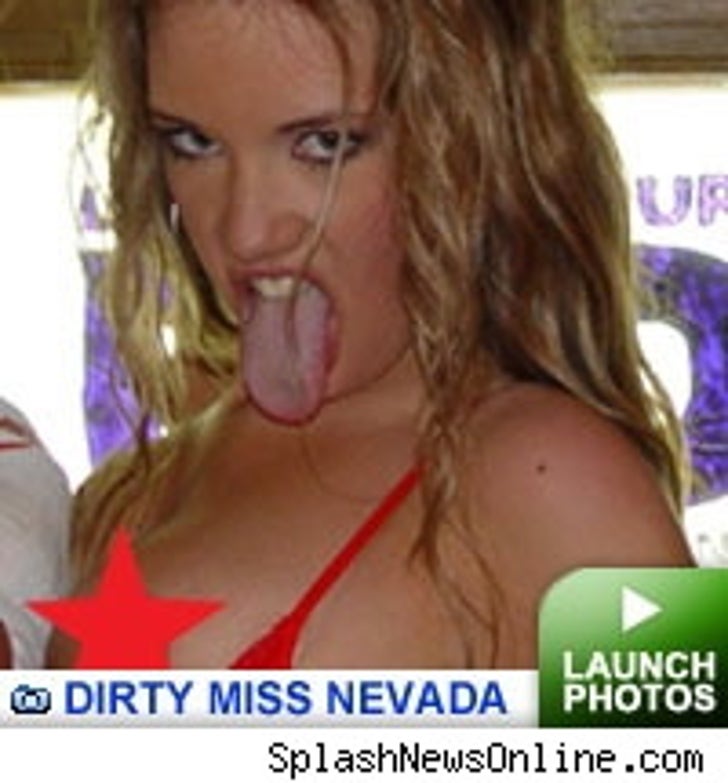 Katie Rees was apparently so drunk the night she took the infamous photos that got her booted as Miss Nevada, she doesn't even remember taking them. You don't say?

"When I saw them, I was shocked," a tearful Rees told "Inside Edition." "We were just out being goofy girls and celebrating. We had a few drinks. That night, I don't think I thought about much of anything, to be honest with you."

She claims that, unlike Miss USA Tara Conner, she was unfairly treated. "These are things that I didn't do during my reign as Miss Nevada. These are things that were done three years prior to knowing that I would be a public figure. I don't see why these pictures change the person that I was when I won it."

Not so fast, Katie. We found another photo of you pulling the exact same stunts on a different night in a different bar!

Britney to Isaac: Next!

Another one bites the dust? Alas, Britney Spears is already bored with her latest boytoy, Isaac Cohen.

While pounding the pavement looking for the next hot party, Brit announced to the paparazzi that she and Isaac were over, reports Perez Hilton. After the "peanut butter" incident, maybe Isaac literally realized what a mess he had gotten himself into.

Meanwhile, Brit came dangerously close to bumping into two of her other exes in Las Vegas. A day after the party girl left Sin City, Kevin Federline was spotted checking out a Justin Timberlake concert. Is an unlikely friendship about to blossom?

O.J. Throws Bucks at Goldman to Shut Him Up

O.J. Simpson wants to give Fred Goldman, father of Ron Goldman, a cut of his loot. According to the New York Daily News, Simpson is willing to give Goldman "a percentage" of his future earnings -- for him to just get off his back. "Fred Goldman needs to get rid of the anger and deal with this as a business deal," says Simpson's attorney. To that, Goldman says, "No way in hell I'd enter into a business arrangement that benefits him. He belongs on a gurney with a needle in his arm to end his life."

Donald Trump recently complained about the fact that a sanitation department garage was being built down the street from his new Trump SoHo Hotel. But New York City Mayor Mike Bloomberg made it clear the garage wasn't going to budge. "Donald Trump's one of those guys that certainly speaks his mind," he said on his WABC-AM show. "Nobody wants these things in their neighborhoods, and they got to be some place. That's the bottom line" ... CNN extended Anderson Cooper's contract, paying him a whopping $4 million a year. He previously earned an estimated $2 million a year ... Former "Felicity" star Keri Russell and her fiancé, Shane Deary, are expecting their first baby this summer.