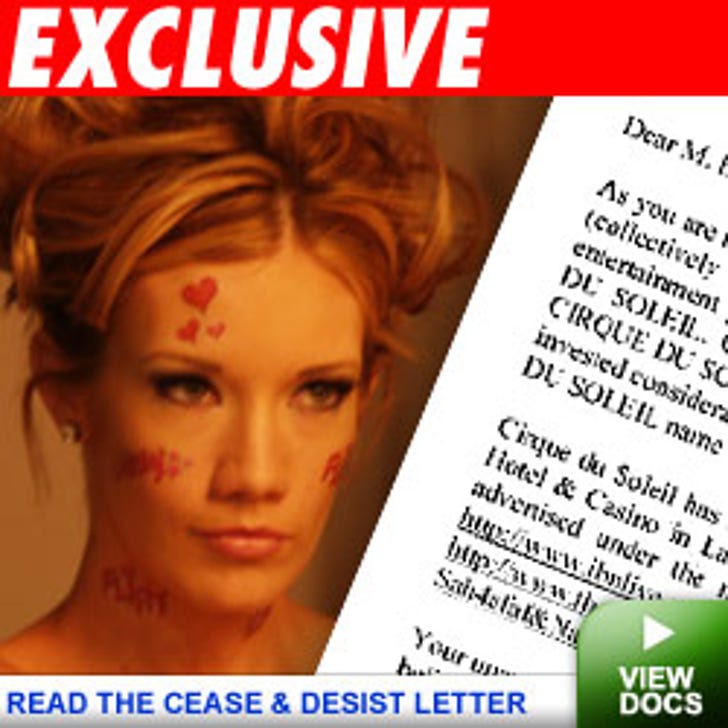 The former Miss Nevada is smack in the middle of another sexually charged controversy ... and this one could reach its climax in court.

TMZ has obtained a cease and desist letter from Cirque du Soleil, sent to "Beacher's Madhouse" host Jeff Beacher at the Hard Rock Hotel in Las Vegas. The letter asks him to halt production on the "orgasmic" part of his variety show, hosted by former Miss Nevada Katie Reese, because it infringes on Cirque's trademarked name.

Cirque believes that Beacher has been advertising the orgasm contest as a "Cirque du Soleil" event in several online publications. Beacher insists that the name was used in blogs by mistake, and that it was never part of his show.

The letter asks Hard Rock to stop advertising the show on their website, and "post a prominent" retraction on websites where it appeared. Oddly, the Hard Rock never used the name on their site.

TMZ spoke to Beacher, who told us, "I have no intention, and have never even thought about calling my orgasm contest the Cirque du Soleil Contest. I'm calling it exactly what it is; an Orgasm Contest." Beacher's attorney, Mike Heller, told us "Mr. Beacher appreciates Cirque du Soleil and would never use their name in vain. We ask for a total retraction and apology from Cirque du Soliel."