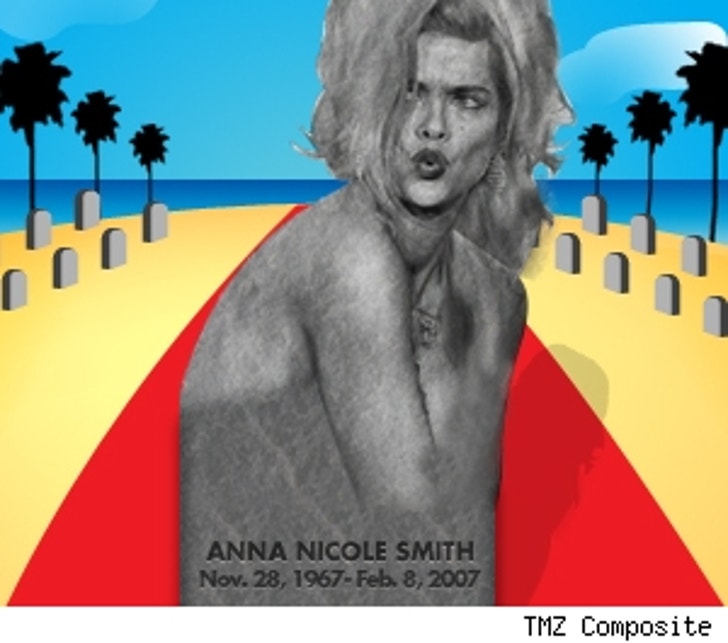 Is Anna Nicole's grave going to be a tourist attraction? A spokesman for the cemetery where Daniel is buried told TMZ that there were now four or five visitors a week at the grave. With the fight over the body, TMZ wondered if there was money to be made in the crypt (so to speak), so we asked the King of the Internet Graveyard, findagrave.com founder, Jim Tipton.

"Most cemeteries wouldn't welcome the additional foot traffic and vandalism," said Tipton, citing the desecration of Jim Morrison's grave at Pere-Lachaise cemetery in Paris, which "now has a security guard ... cemeteries like to have someone historical, not someone as tabloid as Anna."

Asked about the potential for making money from the gravesite, Tipton said

that there are only a few graves where they charge admission, like Princess Diana's or Elvis', where E is buried in the backyard of Graceland. James Brown's family is still undecided about where they're going to bury him. It miffs Tipton that you can't see Richard Nixon's grave without paying admission to his library. "Many cemeteries like having visitors and will give you maps, but in California there's a culture of privacy which extends into death. Forest Lawn is very private, with locked mausoleums," said Jim, "Findagrave.com now helps celebrity 'gravers' locate graves in these cemeteries that are notoriously tourist-unfriendly."

When asked if Anna's grave would be as popular a tourist destination as Princess Diana's or Marilyn's, Tipton said, "Anna's no Diana. In death, she won't have the notoriety that Marilyn has. She will have just a passing interest. There'll be six months of traffic, that's about it. Although her memorial on our pages has been visited almost as much as John Ritter's and Christopher Reeve's." Tipton added that he was glad she was buried in the Bahamas, because he'd like to make a trip there.

While TMZ had the expert on the line, we asked -- who's got the best grave? "Al Jolson's in Culver City is spectacular for its sheer grandeur ... tiered waterfall and a statue of him in his signature one-knee pose."