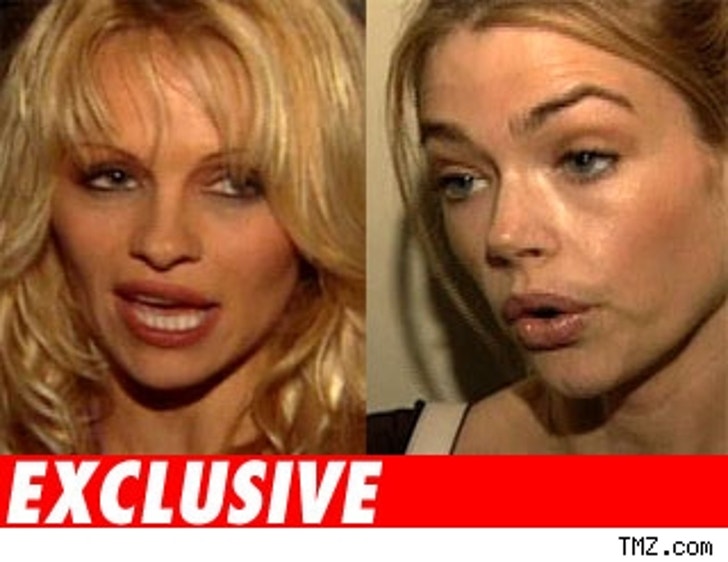 Two photogs are claiming that an alleged violent incident involving Denise Richards and Pam Anderson has caused them to have nightmares, and now they want the dream babes to pay up.

In a lawsuit filed today in Los Angeles County Superior Court, Scott Cosman and Rik Fedyck claim that Denise Richards went into violent rage when she spotted them taking photographs of the actresses on the Canadian set of their upcoming movie "Blonde and Blonder" in early November 2006. According to the lawsuit, Richards "launched into a verbal tirade and a physical assault upon Cosman and Fedyck which lasted over 20 minutes" at the River Rock Casino Resort in Vancouver. During the incident, which the men claim was all caught on tape by a hotel security camera, Richards allegedly called the men "f**king c**ksucker at least 12-15 times as well as scumbags, douche bags and paparazzi scum."

According to the lawsuit, Richards then "snatched their laptop computers from their hands, and threw them over the [hotel] balcony" and into the lobby. One of the computers allegedly struck "an elderly woman in a wheelchair."

Canadian police investigated the incident and decided it "wasn't in the best public interest to bring criminal charges" against Richards.

In the lawsuit, the photogs claim both Richards and Anderson falsely told the Royal Canadian Mounted Police that Fedyck and Cosman made violent threats against Richards and engaged in other "criminal activity." As a result, the men were "arrested and held by authorities for approximately three days."

The photogs are suing both women for assault, battery, defamation, false arrest and a slew of other charges. No specific amount was named in the lawsuit.

Calls to reps for both Richards and Anderson were not immediately returned.