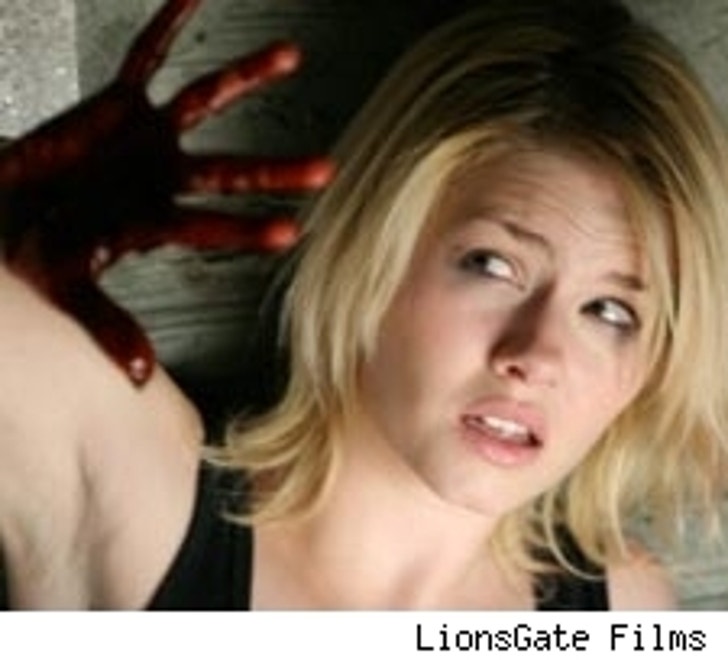 In Hollywood, unprecedented chutzpah is usually met with approbation, not probation.

The Motion Picture Association today took the unusual step of issuing a month-long suspension of the ratings process for Roland Joffe's upcoming horror film, "Captivity." The film was planned for a May 18 release, but will not have to wait a full month before it can go before the MPAA ratings board, meaning that it will likely miss its planned release date if it wants to get a rating.

This all started a week ago, when "Captivity" billboards starting putting people off their lunch in L.A. and New York: Four graphic panels showed a young woman going through "abduction," "confinement," "torture" and "termination." As the Los Angeles Times columnist Steve Lopez aptly put it, "I thought about ordering up a photo of the billboard for this column, but trust me, you don't want to see it. I felt like I needed to take a shower just from having been within a hundred feet of it."

The MPAA says the 'art' work was "summarily rejected" but went up on billboards anyway. After Dark insisted it was a "communications error" with their printer, and said they'd be taken down. Six days later, they were still up. Finally, they came down, but were replaced with a defiant "'Captivity' was here." Hardly contrition, though Courtney Soloman, the film's producer, said "nothing like this can ever happen again."

Now, per the MPAA, "the production company and its distributors will also be required to clear not only all promotional materials but also the locations and venues of all advertising buys relating to the film" -- the first time such a demand has ever been issued by the MPAA.

Clearly, we're in for some interesting times ahead: In a recent interview with MTV.com, 'splat pack' director Eli Roth ("Hostel") had this to say: "Hopefully, we'll get to a point where there are absolutely no restrictions on any kind of violence in movies."

And as for After Dark, well, even more good news: They've just acquired the North American distribution rights to the suicide-themed comedy, "Wristcutters," about young adults who kill themselves and end up in purgatory. They're currently planning a campaign wherein teens are shown committing suicide by jumping off bridges, electrocuting or hanging themselves.