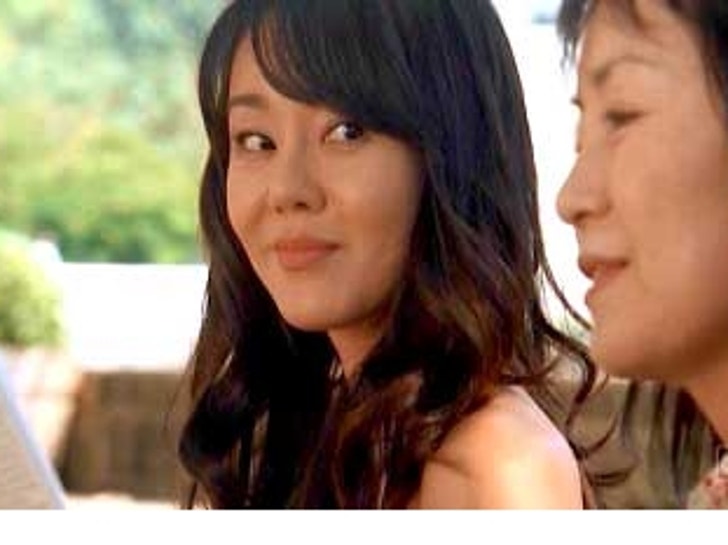 While we were watching "Lost" last week, Ari joked that when Charlie "died," all the Diary readers were probably thinking of me. And, lo and behold, I got several comments last week like this one: "Man when I saw the arrow go in Charlie's neck I was saying to myself Daniel is going to so love this." Or this one: "The first thing I thought of when Charlie was shot in the neck was 'Daniel is going to be so happy.' "

You guys are the best, really. And the offer still stands: When Charlie really does die, party at my house.

For all you "Lost" Diary newbies, here's how it goes. I gather with a group of friends watching "Lost," writing what happens on the show as it happens, and throwing in my two cents along the way. We got the OG crew back together this week: Ari, Lauren, April and Matt. Let's roll: 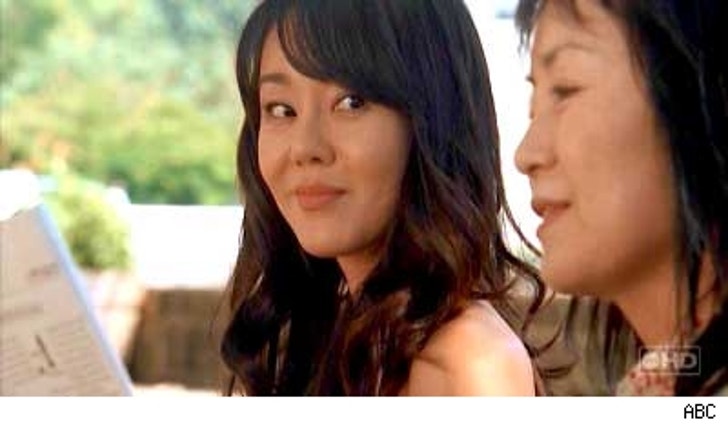 10:00 -- We're all curious about what's going to happen with Sun's pregnancy. Who is the dad? Will the Others want her or her child? Will she survive the pregnancy? Now Jack is curious too. A little too curious, maybe?

10:02 -- It's Sun flashback time and we've jumped back to when Jin and Sun first got married. I like that the flashbacks lately aren't completely linear.

10:03 -- Some of you may remember that I always make fun of Jin/Sun flashbacks because they use the words "honor" and "shame" in nearly every scene. The fact that Jin's mom is a prostitute will apparently bring shame to Mr. and Mrs. Kwon. From now on, whenever the words "honor" or "shame" are used, you have to drink.

10:09 -- Nothing really interesting going on yet with Sun and Jin, except that after nearly three years of "Lost" I now am 100% certain which is Sun and which is Jin. I used to get it backwards every now and again, but I am good now.

10:10 -- Yup, Sun is suspicious of Jack. I don't know why it's weird when a doctor asks a pregnant woman how she's doing, but it just is.

10:11 -- Sun confronts Juliet about her "research" and Juliet acts like she didn't know Sun was pregnant. Riiiiiiiight.

10:13 -- The crew of Desmond, Charlie, Jin and Hurley is really starting to bore me.

10:14 -- But then Mikhail comes running out of the woods. Which wouldn't be weird except for the fact THAT HE DIED!!! 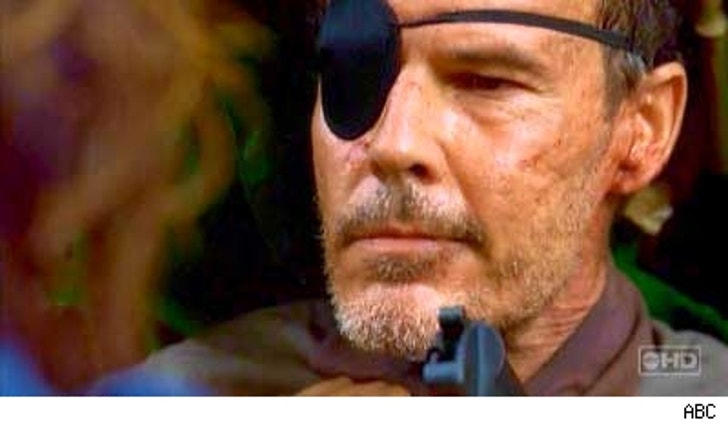 10:19 -- Desmond takes Mikhail up on his offer to save the parachutist. Given the circumstances, I'd say it's the right call. Though I'd like to point out again, MIKHAIL DIED ALREADY!!!

10:24 -- Juliet wants to take Sun somewhere, just the two of them, to answer Sun's questions about the Others. Here's my question: has it been a week since Ben told Juliet he'd see her in a week? Cause if so, say ìë to Sun. (Yes, I looked up how to say "goodbye" in Korean.)

10:28 -- Sun is hesitant to tell Juliet when the last time she had sex with Jin was. The paternity of Sun's baby is "Lost's" version of the Anna Nicole Smith saga.

10:29 -- Sun is asking her dad for the money to pay off the blackmailer. This scene is almost over and no one said ...

10:31 -- Interesting turn -- Jin began his career of "working" for Sun's dad because of this whole affair. There are always consequences.

10:32 -- After Mikhail saved her life, parachute girl muttered something in Portuguese. Mikhail says she said, "Thank you for saving my life," but I don't buy it for a second. Some Internet research will be required. (Apparently she said, "I am not alone.")

10:33 -- Juliet has taken Sun to the creepy hatch. This is definitely the last place a pregnant woman should be hanging out.

10:34 -- Juliet just gave Sun some bullshit speech about wanting to give good news again and Sun tells Juliet about her affair with Jae.

10:43 -- There is no doubt that Desmond is making the wrong choice in letting Mikhail go, but at the same time I respect the fact that he did. He gave his word and, even on the island and even when the Others are involved, that has to mean something. 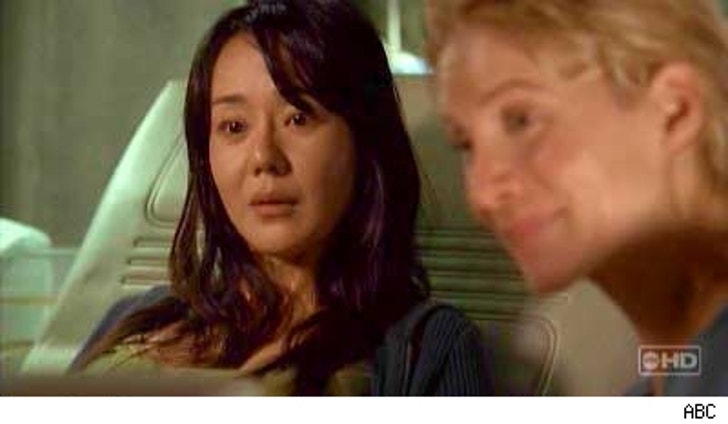 10:45 -- Ok, so I wonder: Assuming Ben and the Others are after Sun's baby, does finding out where she conceived change what they do? Do they want her either way or only if the result is one way? And if it's the latter, I think they want someone who conceived off the island -- isn't that what Juliet said a few weeks back?

10:48 -- Alright, daddy sweepstakes time is almost upon us. I am saying that Sun got pregnant off the island and thus, Jae is the father.

10:49 -- Sweet moment as Sun sees her baby for the first (and only?) time. Man, they are setting this up to end soooooo badly for her.

10:50 -- And Sun got pregnant on the island. So I lose, Jin wins and Sun dies. So if Sun is Anna, that makes Jin Larry Birkhead, Jae Howard K. Stern and Juliet as Judge Seidlin.

10:53 -- Sun goes to meet the blackmailer. I am loving my call that she's really Jin's mom. Not a tough call by any means, but I need to get one prediction right.

10:54 -- Sweet! I'll take any victory I can get. Lauren has proclaimed that Sun is her new Korean idol.

10:55 -- According to Juliet, Sun doesn't have much time and she has no chance of even giving birth. Damn. Is abortion not an option?

10:56 -- Juliet is going back inside the hatch for some reason. Hmm, that doesn't sound suspicious at all ...

10:58 -- Juliet is leaving Ben a message. Apparently her assignment was to find if the women on the island were pregnant -- or at the least the one's who aren't just milling around in the background. 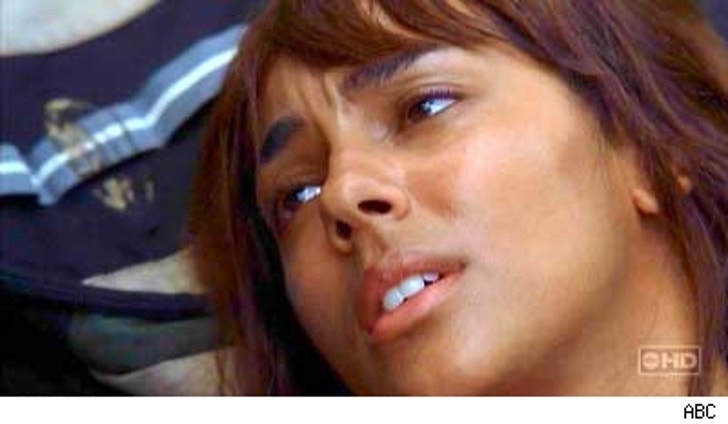 We got a few answers tonight (the paternity of Sun's baby, more info on Juliet's "mission") and got hit with a few more questions, too (Mikhail is alive? Everyone on Flight 815 died?). It was a good mix of give and take and the flashback had just enough information to keep me interested the whole way through. Add it all up, and the episode gets a B from me. Not bad considering it didn't have Locke or Henry Gale in it.

One of the first "Lost" theories about the show to become popular was that the Losties didn't survive the plane crash and they were all in purgatory -- producers quickly said this was not the case. The ending of tonight's episode sure lends credence to that old theory.

Assuming they aren't all in purgatory, and assuming this woman isn't lying (after all, she was looking for Desmond) here is a quick theory that will no doubt be proven wrong: Once the plane crashed on the island, Henry Gale called back to the Hanso/Dharma people to tell them what happened. The powers that be decided they couldn't have rescue teams come looking for the plane because they might find the island. So they somehow staged a fake crash site to keep people from looking. Could be, right?

So I am going to continue the theme of "community" that we have here at the "Lost" Diary with my question to you this week: Obviously we're all "Lost" fans here (except the guy who posts under the name No Longer A Lost Fan), but is "Lost" your favorite show? If not, what is? Catch you next week.