Hector Monserratte (we don't really know who he is either) held a birthday party at Falcon in Hollywood last night, where guests included the train wrecktastic Bobby Trendy, Daniel DiCriscio and transgendered phenom Alexis Arquette. Happy birthday to who?! 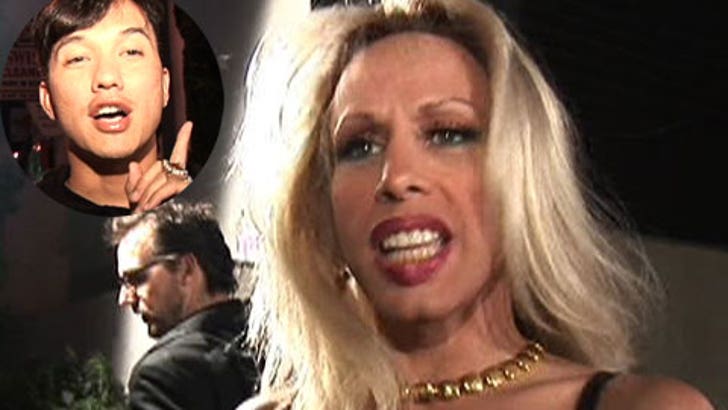 Monserratte, who was nominated for something called a WeHo Award for something called Best Male Personality, had to roll out his own red carpet at the event and was spotted by TMZ's photog applying tape to the side to keep it from coming loose. You bettah work! Making matters worse was Ms. Arquette, who showed up not even knowing the guest of honor's name, majorly flubbing up her birthday shout-out for our camera. Drink yer juice, Shelby!

Daniel DiCriscio, separating himself from Zarf comparisons by growing some facial hair, kept his feud with "Miss Thing" Bobby Trendy going, while one man "Beauty Parade" Trendy -- trying hard to grow a stache himself -- had some words of wisdom for Paris Hilton and Nicole Richie. Don't you wish you were invited to this hellebration?!