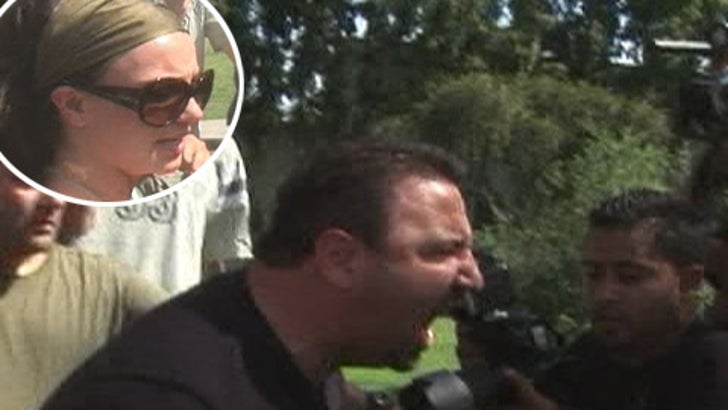 Moments ago, all hell broke loose outside of Lisa Kline clothing store in Beverly Hills, as Britney's bodyguard desperately tried to clear a path from her car to the store. According to several on-scene witnesses, a gang of overzealous photogs went wild trying to score a shot of Spears as she bobbed, and, ahem, weaved her way into the place. Witnesses claim that the bodyguard and sea of photogs violently pushed back and forth as Britney and her new assistant tried to dash inside.

TMZ was told that LAPD was called, but the crazy scene had already calmed down before they arrived. Cops checked in with Spears at her next stop. No one was reported injured, but there were definitely a few pricey casualties -- including a $4,000 flower bed in front of the store, which was crushed during the melee, and the bodyguard's shirt was torn.

Inside the store, Britney didn't seem to be bothered by the mess. Sources told us that she was, "a delight ... she was very sweet."

Afterward, the chaos continued as Britney tried to get back to her car. Brit's massive bodyguard plowed a path to her Benz, while the gargantuan beast roared for snappers to move. They did.