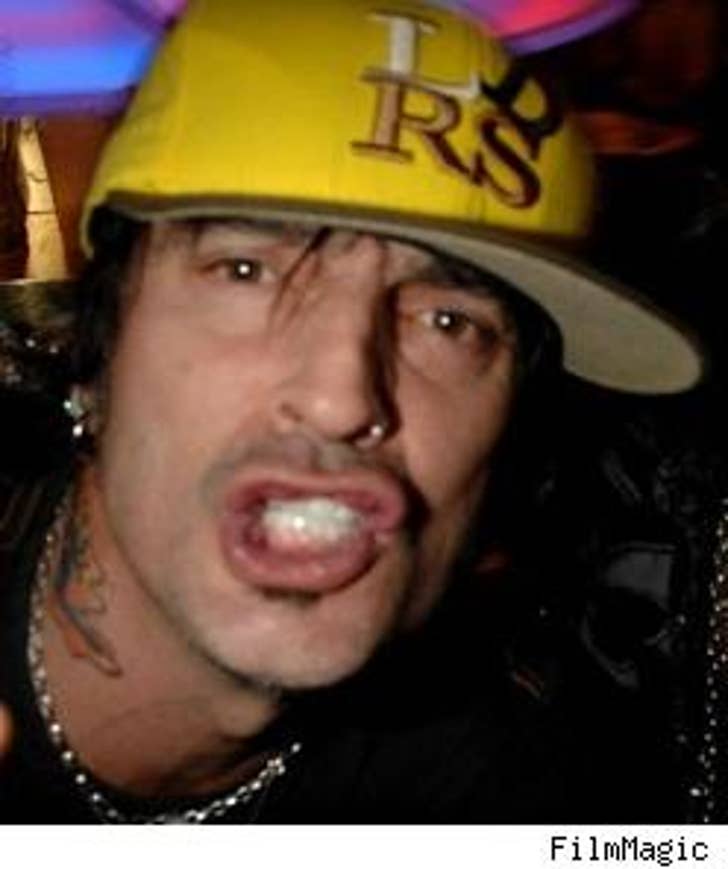 Tommy Lee may have been on the receiving end of Kid Rock's fist at the MTV VMAs Sunday night, but Tommy saw fit to spit back at Kid last night on his site at TommyLee.tv, calling him a "country bumpkin" and pooh-poohing his punch as a "bitch slap." Why don't we just let Tommy tell it like he saw it (in only slightly edited form):

Yeah!! .....here I am minding my own biz having a great time with my friend Criss Angel (magician) and watching the Mtv awards in the front row saying hello to all my friends......Pamela comes and sits on my lap who I love and adore... I get a tap on the shoulder form Kid Pebble...i stand up and embrace him with a semi hug and say "Hey dude...What up"?? He punches me in the face.....well if ya wanna call it that!?....more like a b**ch slap!.......Wuss!! Anyway....i go to knock this jealous no career havin country bumpkin the f**k OUT....and before I can have a meeting with my fist and his ugly ass mug ....security guards...NOT MINE at the Palms grab me and haul my ass outta the award show threatening me that if I move they'll break my arm......yeah whatever!!....my security guard Bruce grabs them and say's I got him....let go!!! So im fine and of coarse leave to my room with police and owner George Maloof......the rest is paper work and bulls**t!... Anyway...... I would like to apologize to Alicia and George and Mtv for the disrespectful bulls**t caused by a piece of s**t called Kid Pebble!!