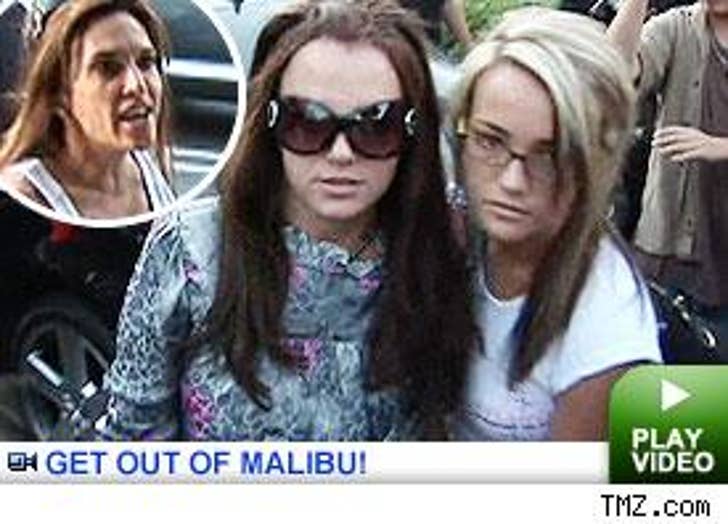 Britney Spears was verbally attacked by a random woman on the street yesterday -- and lil' sister Jamie was not havin' it!

Britney and Jamie (and an army of photogs) were going to a sushi joint in Malibu when a brave woman came up to them and started shouting, "Nobody wants you in this neighborhood! ... you're making the neighborhood unsafe!" The paps defended Spears by yelling at the woman, but then Jamie-Lynn stepped in and shouted in the woman's face, "Then move the f**k outta the neighborhood!"

The woman then tried to put her hands on Jamie, but Brit and her sis hurried into the restaurant. When it came time to leave, they snuck out the back door. The woman continued to scream at cameras, on a rant against Nicole Richie and Madonna as well.

In other Exclusive news, sources tell TMZ the real reason Britney Spears didn't answer her buzzer when her kids came to visit last Thursday is because she wants nothing to do with anyone who tries to tell her how to be a good parent.

We're told Britney was well aware that her kids were coming at 10:00 AM. She had telephone conversations about it 10 minutes earlier. Britney's big concern was that she didn't want the parenting coach, who was in tow, to tell her how to interact with her kids.

So Brit's solution was to not answer the buzzer, as her kids cried in front of the house and waited for 40 minutes before K-Fed's bodyguard pulled the plug and returned home.

Britney has been told for a year that she needed help in raising her kids, but she has steadfastly refused to even get a proper nanny. Now the squeeze is on and she's not responding.

And even though our sources say Britney will show for court as ordered on October 26, another source tells TMZ Britney has repeatedly said she would never attend a court hearing.

And finally, as if her life isn't messy enough, we're told Britney is running out of money. Even though her single is a hit, the prospects of the album remain questionable because she's not going to promote it or tour. And we're told she spends like a crazy woman.

Jenny from the Stumblin' Block 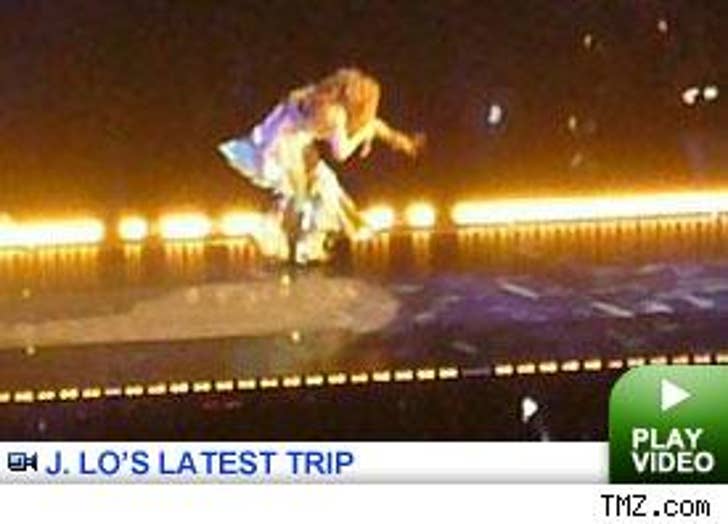 Although her twins aren't due for months, last week Jennifer Lopez was ready to drop -- to the floor!

The 38-year-old pregnant diva nearly ate it big time while performing on a Jamiroquai-esque conveyor belt at the Mohegan Sun Casino in Connecticut. It was her biggest misstep since dating Ben Affleck and "Gigli"!

Interestingly, while Jennifer may have nearly faltered, the track never skipped a beat! Do it well! 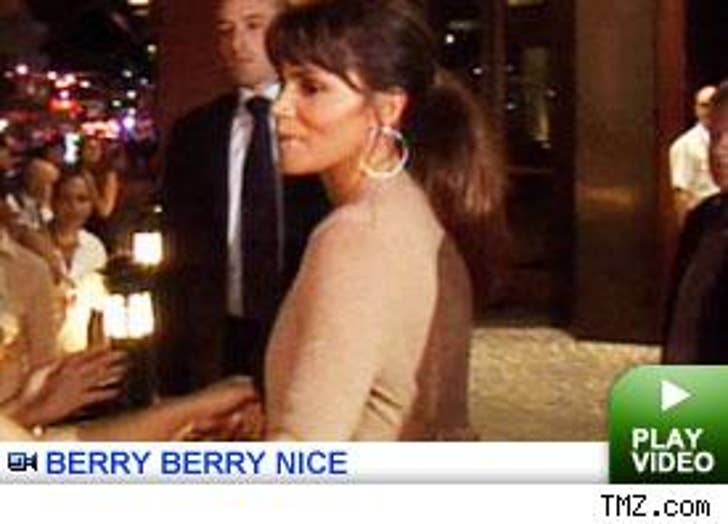 Halle Berry, four months pregnant, is endlessly kind to fans and lensmen, but that wasn't enough for some paps the other night.

Halle hurried up to the Tribeca Grand Hotel on Saturday night for a private screening of her new film, "Things We Lost in the Fire," and though she made a cheerful entrance (unlike, say, Rihanna), obliging the snappers and a few fans, she was roundly booed when she had to stop to go into the screening. A few miscreants even yelled it, "You suck." Nice guys!

Proving her goodwill later, the Oscar winner took pictures with admirers, despite the late-ish hour -- and her condition.

Attention whores Heidi Montag and Spencer Pratt took time off from their busy lives of whatever it is they do -- to make a run to a Los Angeles Target Friday. On the shopping list: a couple dozen copies of the new issue of Cosmo Girl, emblazoned with Miss Montag's mug. *retch* 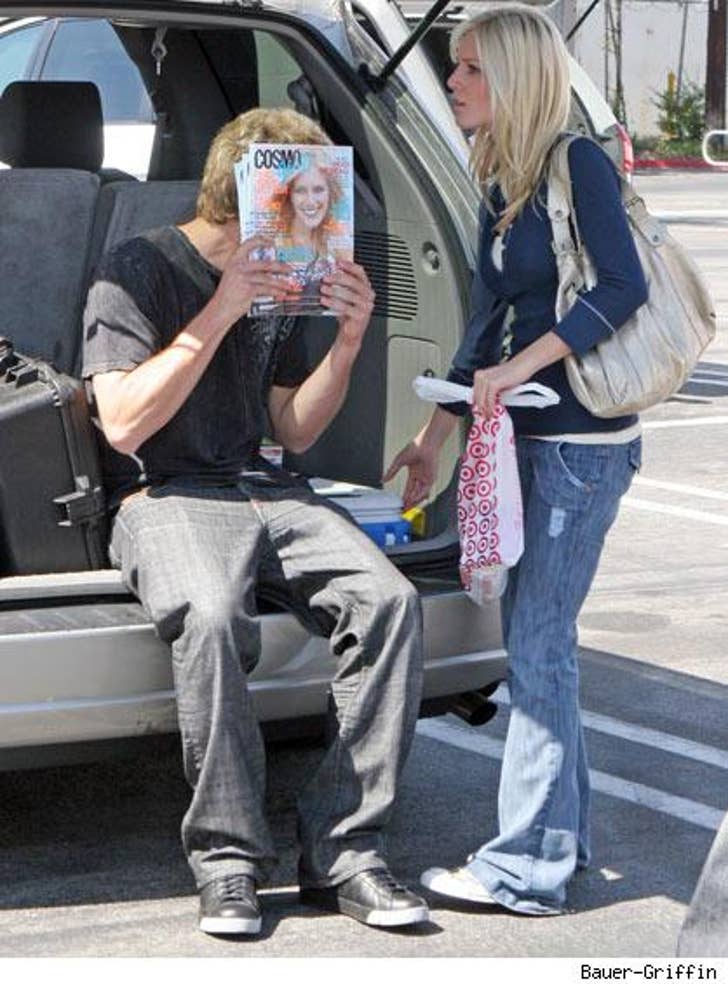 A suddenly camera-shy Pratt found the issues serve as more than just proof of his "Hills" villain girlfriend's fifteen minutes of fame; they also work well as a paparazzi repellent. Priggish Pratt used the tween mags to fend off his adoring flock. Flock that. 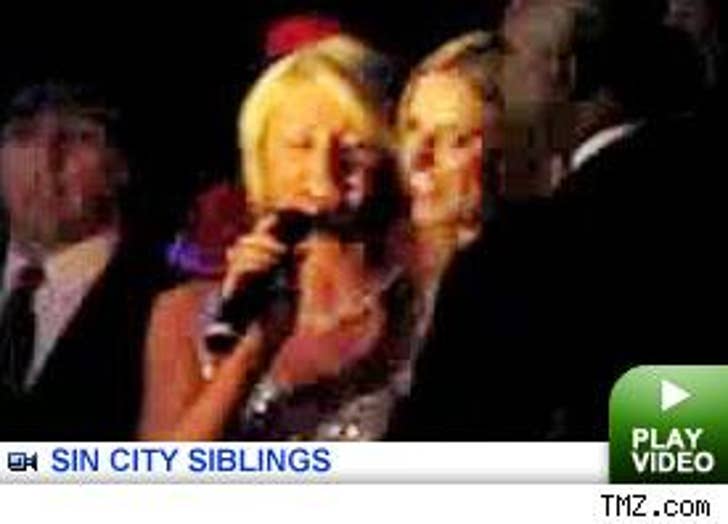 TMZ cameras caught up with a sparkly Paris Hilton as she helped celebrate her sister Nicky's twenty-fourth birthday at Vegas Nightclub LAX on Friday night. When does this girl sleep?!

All eyes were supposed to be on Nicky, but Paris -- still surprisingly extension-free -- stood in the spotlight to give her lil' sis a birthday shout-out. Then, for the rest of the night, Paris danced wildly on a couch -- grabbing all the attention. What a bday surprise!