Jessica Simpson swooped into New York's JFK airport Friday night with a six-person military escort fit for a visiting head of state. But a National Guard honcho tells TMZ, he's looking into whether the troops were really doing their job -- or just star-struck. 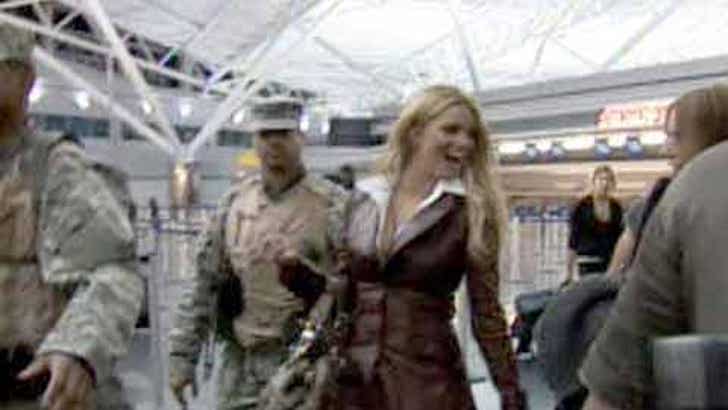 We were there as Simpson touched down and strolled through the airport. We're told the troops got wind Jessica was in the airport and they rushed to search and protect as she walked to her Escalade. The soldiers, outfitted in fatigues, kept photogs at bay.

National Guard Major Angelo Agro tells us he investigated the incident, and says that the soldiers were doing crowd control -- at the request of American Airlines. Asked why six armed soldiers were needed to guard one petite blonde, we're told that it was originally a group of "two or three" soldiers and that the rest of the crew just happened to be walking out at the end of their shift.

Despite the soldiers' efforts, one of the snapper's cameras collided with a friend of Jess' mom, sending her to the pavement, shaking her up badly. None of the soldiers helped the fallen women -- instead they closely guarded their prize.

BTW, the terror alert has been elevated to yellow -- not to be confused with blonde.