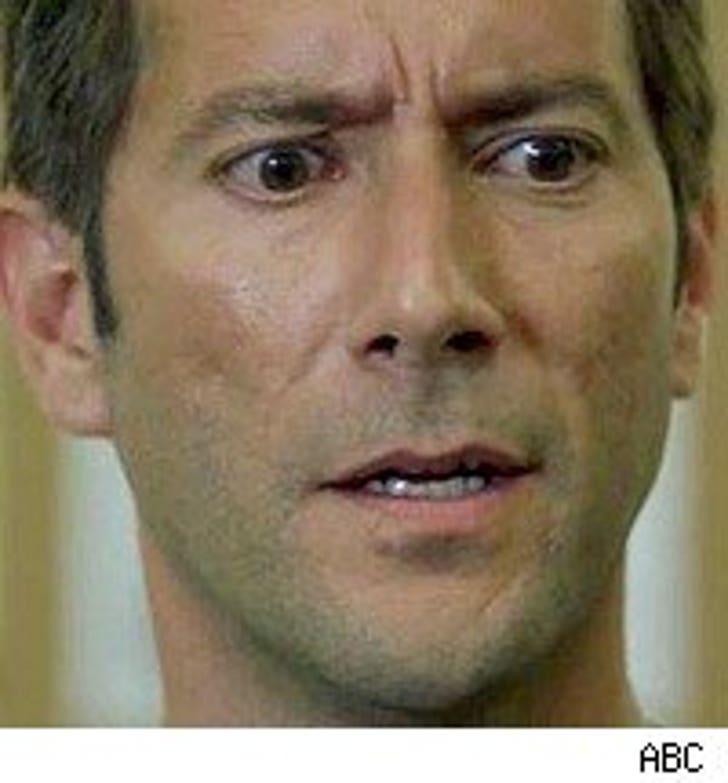 To battle through the doldrums of the week, several TMZ staffers compete in a weekly tournament of a game we invented called Dartball. I had never won a Dartball tournament until February 1 -- the day after "Lost" premiered. I have now won four in a row, meaning I am undefeated for as long as "Lost" has been on this year. Coincidence?

For all you "Lost" Diary newbies, here's how it goes: I gather with a group of friends watching "Lost," writing what happens on the show as it happens, and throwing in my two cents along the way. I am watching tonight's episode of "Lost" alone as Ari and Lauren had plans, and I had to bail on my friend Stacy because my car wouldn't start after my basketball game tonight, so it's currently sitting outside a 76 gas station on Santa Monica Blvd. Good times. Let's roll ...

9:02 -- It's Desmond flashback time (you can tell by the hair). It's interesting to see we're back to doing flashbacks again.

9:08 -- "Your perception of how long your friends have been gone, it's not necessarily how long they've actually been gone." -- Faraday. How could Jack not press him more on this?

9:10 -- Desmond is clearly suffering from the "side effects" that Faraday spoke of.

9:11 -- Great, are we in for another trippy Desmond flashback? I don't think my brain can handle it.

9:12 -- Desmond is back in the military and having flashes about being on the boat -- which he is currently on. Does anybody have any Advil?

9:13 -- Now he's back on the freighter. Side note: tonight's episode was written by Damon Lindelof and Carlton Cuse -- so you know it's going to be a doozy.

9:18 -- Could you imagine if it were Sayid that went nuts? They'd all be screwed.

9:19 -- Sayid finally calls Jack on the phone, tells everyone Desmond's "condition" and now Faraday is explaining that people can get "confused" going to and from the island. Am I going to need my scientific calculator for this episode?

9:22 -- Back in the Army again, Desmond is calling Penny and she wants nothing to do with him.

9:23 -- Sayid and the Lawnmower man break into the sick bay so that Desmond can talk to Faraday -- and the doc rang the alarm. Causing a ruckus on the boat is not a good idea. Just a guess.

9:25 -- Faraday just instructed Desmond to, in 1996 mind you, come and find him. After 25 minutes, this episode is an A for sure. WTF is going on? Although, what Desmond is going through does suggest why Faraday is on the mission in the first place.

9:29 -- Faraday is giving Desmond things to say to his past himself so he will believe him when he finds him. More Advil, please.

9:35 -- Faraday's rat experiment is somehow linked to what is going on with Desmond, since Faraday's rat just ran a maze he hasn't learned how to run yet.

9:37 -- So Tom Hanks in "Philadelphia" guy is Minkowski, the Communications Officer, who tells Desmond that Penelope has been calling the boat. I am starting to realize that I will be of no help as this episode goes on -- I can only ride it as best I can and hope to make some sense of it when it is over.

9:44 -- After a lot of explaining, and some science and what have you, Faraday basically tells Desmond to find Penelope. Did Desmond really need him for that?

9:45 -- Desmond and Sayid are going to break into the communications room, with Minkowski, to call Penny.

9:47 -- A journal belonging to the first mate aboard the Black Rock, which was lost at sea, is up for auction. Really? On top of all that I am trying to figure out here you throw the Black Rock at me too? Come on!!! And it belonged to Tovard Hanso!!! Seriously? I can't handle this anymore!!! Make it stop!!! And it's lot 2342!!! Why can't I stop using exclamation marks!!!???

9:49 -- Penny's dad is back to belittling Desmond, and I kinda find it funny.

9:51 -- Minkowski is out like a light, bleeding from the nose and grunting, "I can't get back." Not a pretty picture for Desmond, is it?

Let's get the easy stuff out of the way. This episode gets an A+. It was one of the pantheon, other level, top notch "Lost" episodes of all-time. I will be floored if I get even one email or IM from a friend of mine who didn't flat out love it.

But that's not what this is about. I could sit here and try to decipher what went down in tonight's episode -- and I would fail miserably. I don't think I could come up with any theory that will help explain any of this. I'll leave that to you guys on the message boards.

What this episode is really about is television. If I've said it once, I've said it a million times -- I look down on people who look down on television. In the last year, have any of you seen a movie that topped tonight's episode? "No Country for Old Men" or "The Constant" -- what would you rather watch? Not even close, is it?

Tonight's episode of "Lost" was great, and it reminded me why I love the show -- but more than that it reaffirmed my love of television. It reminded me why I invest years of my life in certain shows. Anyone can sit in a theater for two hours, that's easy. Television is work and "Lost" is the kind of job that makes your wife leave you because you're always at the office and you never have time for her.

But it's all worth it, right?

I choked up at the end of this episode just like everyone who has a pulse who watched tonight's show did. But I'll be honest with you -- I am kind of choked up again right now when I think about the power of television. I always say that my dream job is to be a television critic, but I don't want to call it that. I am a television advocate -- and right now, at this exact moment as I write this (11:43 PM PT) I am reminded again of why.

You and I are going to spend the bulk of our Friday reading and posting comments on this site and asking everyone we know that watches the show, "Oh my God, did you see 'Lost' last night?"

Let's see the movies do that.

Over at thelostdiary.com, I do a question-and-answer column every week. I imagine this week will be good, since I have plenty to discuss this week. But don't feel like you have to ask a straightforward "Lost" question. Have fun with it. Click here to send me a question.