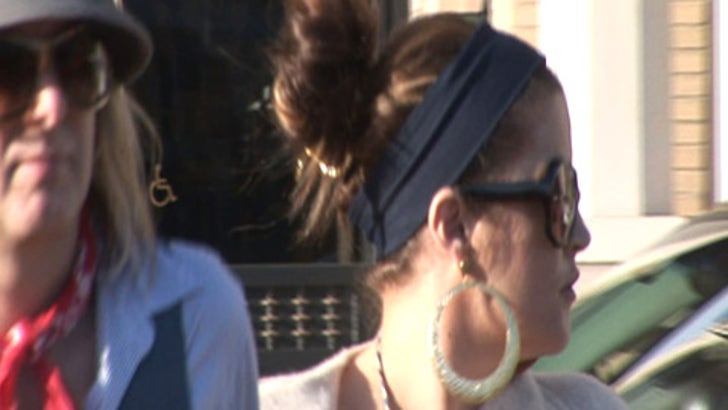 On her MySpace blog, Presley announced that she's pregnant (this will be her third child, first with her fourth husband, musician Michael Lockwood) but she saves her real verbal fireworks to totally unload on the tabloid media, whom she calls "irresponsible," "disgusting," and "black souls." And that's just for starters:

After being the target all week of slanderous and degrading stories, horribly manipulated pictures and articles in the media, I have had to show my cards and announce under the gun and under vicious personal attack that I am in fact pregnant.

Once they got a glimpse of my expanding physique a few days ago, they have been like a pack of coyotes circling their prey whilst eerily howling with delight. Starting with a London publication and then New York and Chicago all writing false defamatory degrading stories about all of the dark possible reasons I could be putting on weight. The US tabloids have been calling all day wanting confirmation on all kinds of insane theories.

They couldn't wait to find out if my weight gain was because I was just overeating, in which case It would be open season and they can do the old following in her fathers sad and unfortunate demise story again or less interesting for them and probably much to their dismay, I could just be pregnant and therefore have a legitimate reason for weight gain at which point they should probably wipe the saliva off of their fangs and put them back in their mouths or they may expose the black little souls that they are.

Now that things are confirmed, hopefully they can stop all of the harassment and I can stop dodging the continuous bullets. It is unfortunate that I couldn't have announced something that is this much of a blessing and that has made us so incredibly happy under better circumstances.

How they have handled themselves with this has been nothing short of irresponsible and disgusting.

Pardon my seething contemptuous tone but ladies, You KNOW if you were pregnant and you felt you were expanding uncontrollably by the moment as a result and the worldwide media started badgering and harassing you for it, plastering you everywhere in an unflattering light, you would be mortified as well.