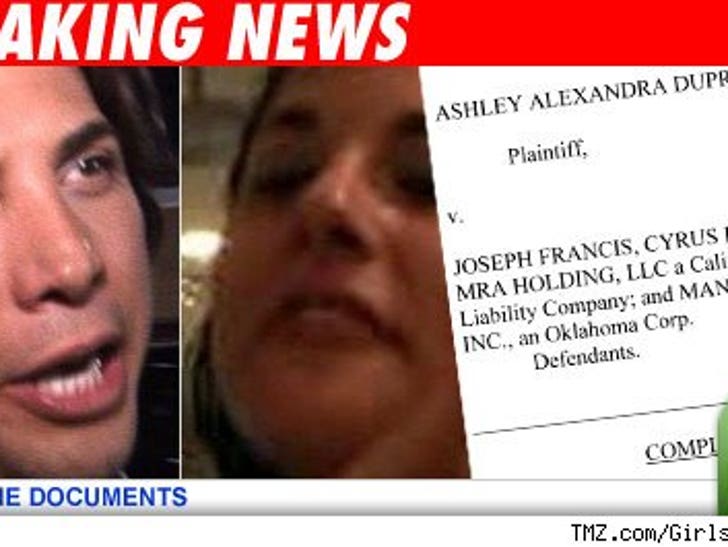 Ashley Dupre filed a lawsuit today against "Girls Gone Wild" founder Joe Francis, claiming she never gave GGW permission to use her name and likeness to advertise videos -- and she's asking for $10 mil. 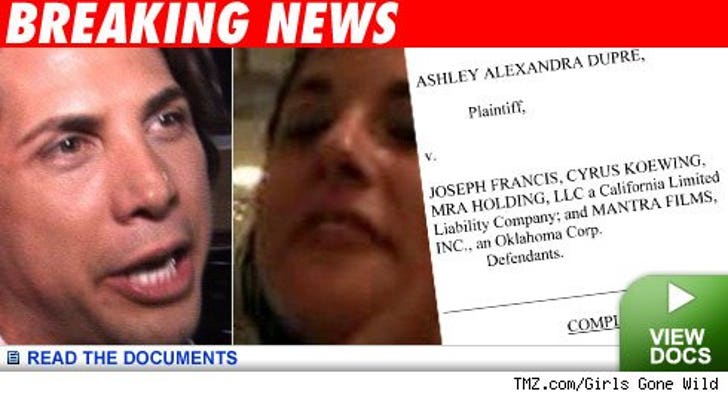 Dupre, the call girl at the center of the Gov. Eliot Spitzer scandal, alleges in the lawsuit that GGW reps approached her while she was "socializing" at Miami's Chesterfield Hotel back in 2003, plied her with booze, and -- once she was drunk -- got her to flash her moneymakers.

Once Dupre became famous, GGW released the video and used it to promote the launch of their new magazine. She was only 17 at the time, she argues, so she was not old enough and "did not understand the magnitude" of what she was doing when she was signing a release ... drunk. But, as TMZ first reported, she had a fake ID that said otherwise.

UPDATE: Francis issued the following statement to TMZ: "We were very surprised and in fact amazed today that Ms. Dupree filed a lawsuit against Girls Gone Wild. We have not publicly released any new video of Ms. Dupree, due to corporate policy of not using footage of individuals younger than 18. It is incomprehensible that Ms. Dupree could claim she did not give her consent to be filmed by Girls Gone Wild, when in fact we have videotape of her giving consent, while showing her identification."

"We did in fact offer Ashley via her New York attorney $1 Million to host and promote various Girls Gone Wild activities – She refused this offer and in fact if she'd like to re-consider, we'd be happy to rediscuss. She should keep in mind, its considerably more than the Governor of New York paid her, and our activities aren't illegal," said Joe Francis, CEO of "Girls Gone Wild."

"She's seeking $10 Million for topless photos taken in front of a room full of people, including two newspapers and multiple crews we had in the room. These images were taken in public places and contain no sexual contact. We expect to triumph in this matter and continue to offer the best and hottest girls," added Francis.