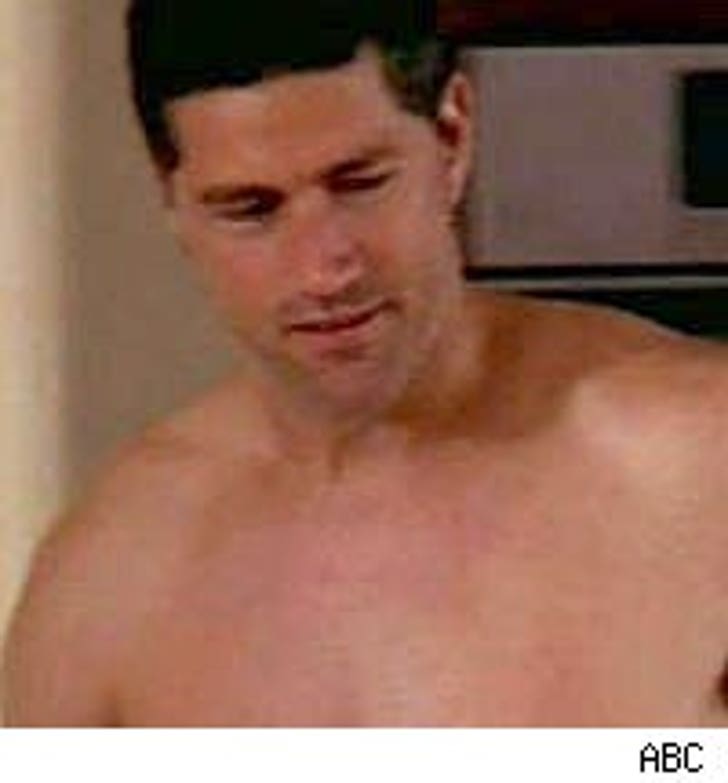 I've bemoaned the lack of "TiVo Moments" this season on "Lost" -- and now I'm wondering if the lack of cliffhangers has sort of killed the anticipation for "Lost" each week. I've looked quickly back at the last few weeks worth of endings and only the "I'm Ben's daughter!" ending really left you hanging. I don't know, maybe it's just me but I don't have the same "LOST IS ON!!!" feeling lately.

For all you "Lost" Diary newbies, here's how it goes: I gather with a group of friends watching "Lost," writing what happens on the show as it happens, and throwing in my two cents along the way. Ari and Lauren are in Costa Rica, so I am flying solo tonight. Let's roll ...

10:00 -- Jack isn't looking so hot. I didn't see this coming at all. Oh wait, yes I did! Hey ABC -- stop airing "Lost" promos! We know it's on. All you're doing is ruining it for us. Does anyone really think that someone watching the NBA Finals is going to stumble on a promo for "Lost" and say, "Hey that show looks good. Maybe I should give it a try"? Really?

10:02 -- Jack flashforward time and it looks like we're getting "somewhat well-adjusted Jack" instead of "raging lunatic Jack." Perhaps this week will fill-in that blank a little bit for us.

10:07 -- From the looks of things, Jack and Kate are playing house now, and have for some time. It's definitely post-trial. BTW -- Kate in a dress shirt? Thumbs up.

10:10 -- Whoa -- looks like Rousseau didn't survive. A little anti-climactic, a tad shocking and a bit disappointing. Great scene with Miles though. More of him, please.

10:12 -- Even if I didn't know Jack makes it off the island, I would never want to watch a show that kills off a main character because of appendicitis. Lame.

10:16 -- Juliet is barking orders around and Kate is standing around looking worried and all I can think is this: How did I ever think Juliet was hotter than Kate? It's not even close. Evangeline, my apologies.

10:19 -- Jack wants Kate to be in the surgery. Apparently he thinks at some point someone is going to be needed to be held at gunpoint.

10:24 -- "Charlie said someone is going be visiting you too. Soon." -- Hurley. Remember last week when I said anytime "Lost" does a scene that's longer than like 2 minutes it's always amazing? No exception here.

10:28 -- Farraday and company are at the medical station and Jin and Sun are back to speaking Korean. I missed subtitles. Only problem? I think Charlotte speaks Korean. Just a hunch.

10:29 -- Lawnmower Man emerged from the bushes with a sat phone and a warning -- HIDE. Sawyer and company smartly listen.

10:30 -- Seems the smoke monster spared all the bad guys from last week. What the hell did it do then?

10:39 -- Have I mentioned lately how much I love Jin? He just totally bitch-slapped Charlotte -- in Korean -- and it was awesome. I want Jin to be my friend.

10:47 -- Ok, now Claire sees Christian holding Aaron. Is anyone NOT crazy this week?

10:52 -- Jack is obliterated and jealous. Things are about to get good.

10:53 -- What man in his right mind would "let it go" when he asks where his fiancee is? Not even Jack would let that non-answer slide.

10:56 -- I think Jack can flush that Father of the Year award down the toilet now.

10:57 -- Claire seems to have followed Christian into the night and disappeared.

Yet another high-level episode of "Lost" -- though I don't think I can sit through another week without Desmond. Feels like the producers know he's the man, so they spread out the Desmond love so as not to waste it. I thoroughly enjoyed this episde -- B for sure -- but I have the same odd feeling after this one that I have had after nearly every episode this season.

I used to judge each episode with the question, "What have we learned?" But lately, we haven't been learning much -- but the episodes have still been top-notch. I am not going to go note-for-note, but we haven't learned anything Earth-shattering this season. The biggest revelations have occurred off the island, and some would argue that all they have done is give away what will happen on the island.

Again -- don't take this as me bashing this season. I have loved it. But at the same time I am left to wonder -- has this season really accomplished anything in the grand scheme of things? Everyone has moved around a bit, the freighter people have landed -- but really, what else is there? I could probably explain what has happened this season in like a minute.

I have often argued there is a difference between a good episode of "Lost" and a GOOD EPISODE OF "LOST" -- last year's Nikki and Paulo episode being a great example." I feel like we've been getting good episodes, but not GOOD episodes. Hope that makes sense.

So my question to you this week is this -- as good as "Lost" has been this year, do you still feel robbed by it? I kinda do. 'Til next week ...