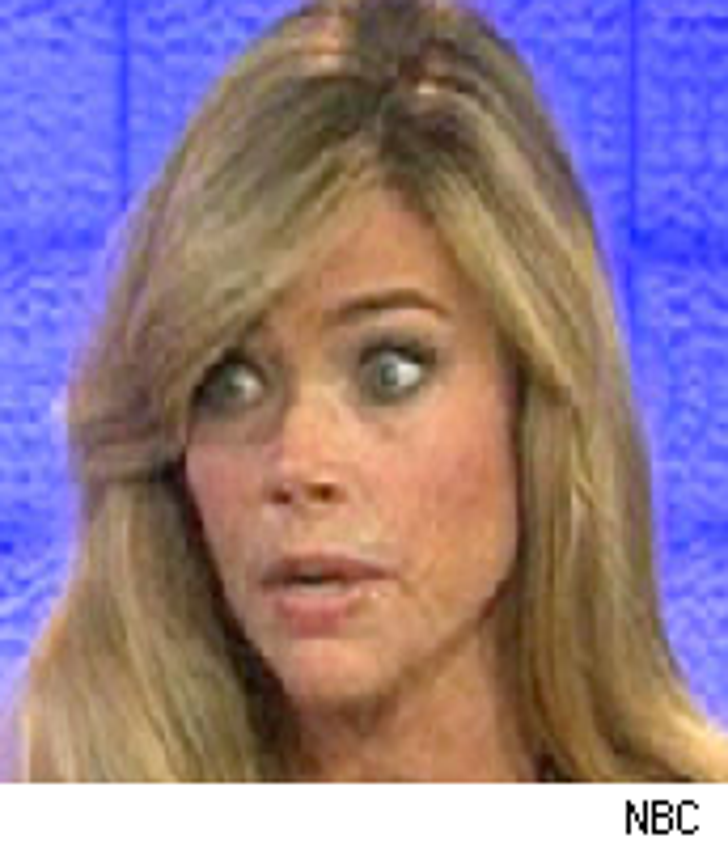 Denise Richards and Charlie Sheen are both wonderful parents, Scene 76: Denise blabs to the tabs about Charlie's "prostitute-tranny-infested" sperm.

Mama D just couldn't leave well enough alone after appearing on every talk show known to humankind, claiming in the New York Post that Sheen sends her rage-filled texts, like: "I hope you and your worthless retarded father get cancer and join your stupid mom. Rot in hell you ****** whore." (Denise's mom died of cancer.)

And then, this, about those supposedly faked emails: "I don't want Charlie's prostitute-tranny-infested sperm ... I am so over him. He's disgusting." Charlie's rep says they'll confirm the email's provenance with "computer DNA."

Jenna J –- I'm the Next Angelina

She tells Us that, just like Mrs. Brangelina, she's "gonna stay unmarried, and just go for the babies. ... I'm following in Angelina's footsteps." JJ says that she and Tito Ortiz are trying to make lil' ones, and that her two failed marriages have taught her that the nuptial bond is "just a piece of paper."

Not that you wanted to consider Oprah Winfrey's gastric and colonic health first thing in the morning but the talk empress says she's going to do a 21-day cleanse, with no animal products, caffeine, sugar, gluten, and alcohol.

As People reports, Winfrey will keep a blog about her detox cleanse, which she says was inspired by Kathy Freston's book "Quantum Wellness" and Canadian inspirational speaker Eckhart Tolle. "Don't know if I'm going to feel better or worse, but I'm willing to try to see if my body at least feels differently," she writes.

Party Favors: Dreyfuss Will Do Dick ... Lohans Back in Court ... Michelle Williams Blinds 'Em in Cannes

Richard Dreyfuss has the thankless task of playing Vice President Dick Cheney in Oliver Stone's George W. Bush opus, "W," says the Chicago Sun-Times. Josh Brolin will be playing the Prez. ... Michael Lohan is hauling ex-wife Dina back into divorce court, claiming to Rush & Molloy that he hasn't seen the kids as agreed. "She breached the contract," says Mike. ... And just to send you off on Memorial weekend on a lovely note, Michelle Williams was by all reports radiant and dazzling to behold at the premiere of her new film "Wendy and Lucy" in Cannes.