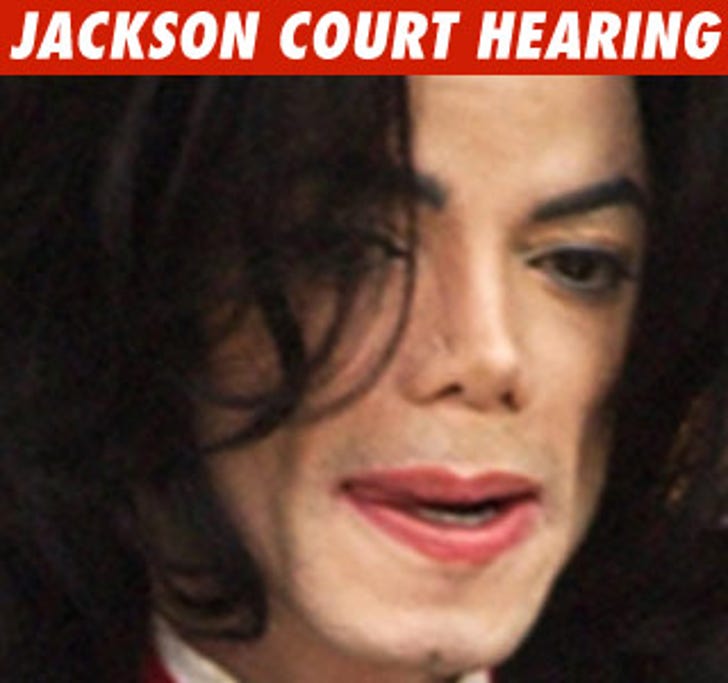 4:54 -- During the lunch break John Branca said Jackson's estate has reached a settlement with AEG -- re: merchandising and rehearsal footage.

4:49
-- Katherine Jackson just withdrew her petition asking that she be put in charge of the estate. This petition was filed before she knew a will existed. The issue now -- will she oppose the appointment of Branca and McClain.

4:40 -- The Jacksons have all filed back into court and the judge has taken the bench.

3:00 -- The judge just admitted Jackson's 2002 will into probate. The will names John Branca and John McClain as co-executors. We know Katherine has a beef with that. The question -- will she challenge the co-executors or possibly ask that she be named as a third executor. Court is in recess for an hour-and-a half. Stay tuned.

2:50 -- The judge has ruled that AEG has to provide a copy of their contract with Michael to Katherine Jackson.

2:28 -- Family members have begun to file back into the courtroom. The judge has yet to come back.

12:55 -- The judge decided on the lesser amount because of concerns about duplicate expenses for the monthly allowance approved for Katherine.

12:42 -- The judge has just granted 83.5% of what was requested for the children's allowance. Specific amounts were not discussed.

12:41 -- The lawyers are now discussing the allowance for Jackson's three kids.

12:40 -- Debbie Rowe will have visitation rights with her two kids and will continue getting spousal support based on the agreement she struck with Michael several years ago.

12:39 -- The judge granted Katherine a financial allowance for six months retro from the time Michael died. The amount of the allowance wasn't discussed in open court.

12:26 -- Debbie Rowe's lawyer, Eric George, just said he won't object to Katherine being appointed temporary guardian, but permanent guardianship could be delayed. It's curious given the supposed settlement between Debbie and Katherine.

12:24 -- The judge just said Klein has no legal standing to lodge an objection ... that Michael Jackson and Debbie Rowe are the parents.

12:18 -- The judge wants to know what legal standing Klein has -- this could force the issue over whether he's the daddy.

12:17 -- Get this. Mark Vincent Kaplan (K-Fed's lawyer) just showed up on behalf of Dr. Arnold Klein. Kaplan says Klein has a long-standing commitment to Michael Jackson and has concerns about Joe Jackson being involved with the children. There are reports Klein is the father, but he hasn't confirmed or denied.

12:14 -- The judge is on the bench. He'll be dealing with the guardianship settlement between Katherine and Debbie Rowe first.

11:56 AM ET -- Katherine, Randy and La Toya were escorted upstairs to the courtroom. La Toya is wearing a black jacket, slacks, and a white blouse. Katherine is wearing a brown suit, looking calm ... and chewing gum.

11:45 AM ET -- Katherine and the lawyers are inside the courtroom. Two of Michael's sisters and one brother are also expected. The hearing is expected to begin shortly.