TMZ has obtained crazy video of Travis Barker and his friends threatening paparazzi outside a Calabasas restaurant -- spitting at the photogs, hitting the camera and, allegedly, slashing a photog's tires. 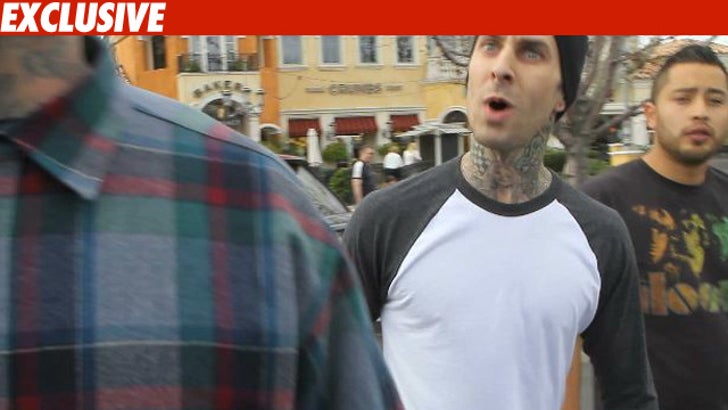 In the video, Travis starts out by screaming, "Where's your homeboy?" As we first reported, Travis got into it with a photographer on his way into the restaurant -- but neither of the two photogs in the video are that guy.

The photogs claim one of their phones was stolen. When one of the photogs confronts Travis' friends about the phone, a guy can be heard saying, "F**king snitch fa**ot motherf**ker, no one has your gay ass phone."

After a few more minutes of arguing, and the arrival of cops, a photog noticed his tires were slashed.

The photogs told cops they did not want to press charges. No arrests were made, but a vandalism report was taken.

UPDATE: You can read Travis' response to the incident on his Twitter page, saying in part, "Paparazzi cried like young girls when it was no longer three of them against me and my kids. Didn't they remember threatening me an hour ago? What happened to the tough guys with the cameras? It was gonna be a fair fight."