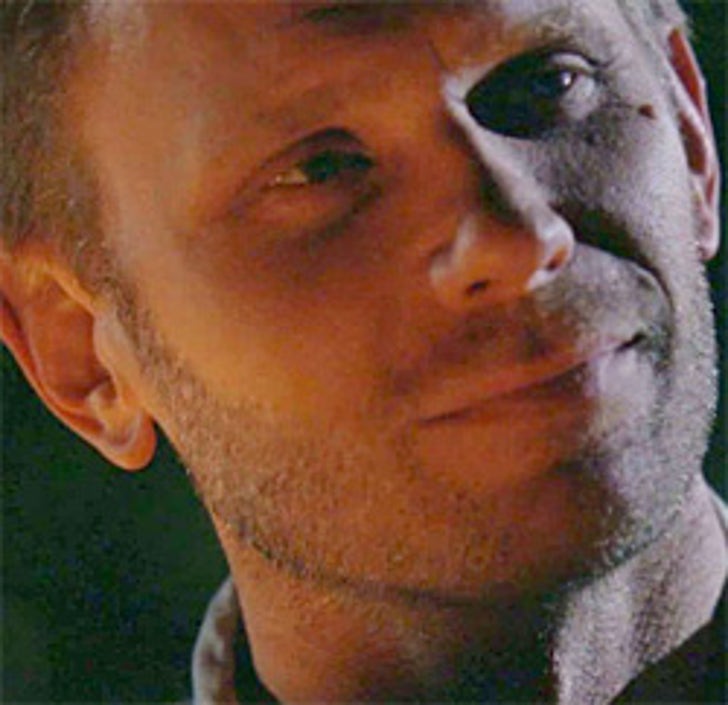 As we get close to the end, I've been thinking a lot about what I've always said is the difference between "The Wire" and "The Sopranos" -- confidence vs. arrogance. For "Lost" to -- in its second to last episode -- do an entire hour without any of its many characters appearing in the episode … well, to quote Alec Baldwin, takes brass balls. Damon Lindelof and Carlton Cuse are either the most masterful storytellers of our time … or giant a-holes. I'm not sure if there is an in-between.

Either way, this is the last episode before the finale. Time flies. Let's roll …

9:00 -- During the "Previously on Lost" segment -- where they show Jin and Sun dying -- I was hoping ABC would edit in a line from either one of them about their soon-to-be orphaned child. Nope, didn't happen.

9:01 -- The gash on Jack's neck makes him look like Tom Hanks in "Philadelphia."

9:02 -- According the musical score, we are watching an emotional scene between Jack, his son, and Claire.

9:03 -- Kate brings up the fact that Jin and Sun had a kid (bout time someone did) while Jack sews up her bullet wound. I wonder if Sawyer feels guilty about what happened or if he thinks it wasn't his fault?

9:06 -- Judging by the blank stare he's got going on now, I'd say Sawyer does actually feel guilty.

9:07 -- One minute there's a parking lot full of people, as Mr. Locke returns to school, and the next Desmond can beat Ben senseless and no one sees a thing. But he flashed, so mission accomplished.

9:08 -- "I lived in these houses 30 years before you did, otherwise known as last week." -- Miles. Good to see the Ben/Miles/Richard contingent back. Off the top of my head, I'd say Miles has to make the list of Top 10 Most Underutilized Characters in TV History list.

9:10 -- It's been so long, I kinda forgot -- Ben used to have some sort of control over the Black Smoke Monster.

9:16 -- Seems Jacob summoned Widmore to the island, which makes Ben a tad jealous.

9:19 -- Desmond turned himself in to the police for running over Locke and beating up Ben. Not quite how I would have played it, but then again …

9:22 -- Little Jacob is back and he wants the ashes Hurley took from Ilana.

9:27 -- Ben is staging a last stand, Richard is kind of on board, and MIles is getting ready to run away through the jungle. Minor prediction: Miles doesn't live to see the finale.

9:28 -- Um, what I meant to say is that Richard doesn't make it to the finale. Hang on a second while I edit that last entry.

9:30 -- Old school Ben Linus -- selling out Charles Widmore to Not Locke. Good to see he got his balls back from Jacob's purse. It's a satchel!

9:32 -- Rousseau might be the only woman on the show who looks better off the island than on it.

9:36 -- "I want to know that Sun and Jin and Sayid didn't die for nothing." -- Kate. Apparently Kate didn't read the guide info -- the episode is called "What They Died For." Just be patient Kate, we're gonna find out in the next 24 minutes.

9:45 -- Jacob is trying to explain to everyone what he did and why he brought them to the island. Not sure there's enough time to explain all that.

9:55 -- Jacob is performing the wine ceremony, for lack of a better term, but this time with some water in the stream. Kinda liked it better when I thought there was magic wine.

9:58 -- "Dude, you didn't tell me Ana Lucia was gonna be here." -- Hurley. Unfortunately, I spotted Michelle Rodriguez's name in the credits, so I knew she was going to be here.

10:01 -- "Because I'm gonna find Desmond and he's gonna help me do the one thing I could never do myself. I'm gonna destroy the island." -- Not Locke

There was no way in the world the series finale of "Lost" wasn't going to be the most anticipated episode of television of my life. I'd been saying all season long that I don't feel like I can even begin to rank "Lost" among my favorite shows of all-time until the series ends -- how it ends will determine how I remember all six seasons … right or wrong.

But now I feel that way more than ever. The last two weeks -- and the more I think about it this entire season (especially the flash-sideways universe) -- has been leading up to this finale. I can't imagine that any show in history has had more riding on an episode.

Would you have it any other way?

"Lost" has been indefinable from the beginning. It has broken every mold and transformed what is capable on television. Before "Lost," did you ever believe a television show could send you to the Internet scouring for clues? Did you ever think you'd spend an entire next day talking about a television show with friends?

Did you ever imagine that a television show would actually make you afraid of missing it? I can't miss "Lost" tonight or else I can't talk to anyone tomorrow and I pretty much have to avoid the Internet in its entirety!

Other television is like high school -- you can show up to class, half-ass the homework, not study for a second and still probably get a B on the final.

"Lost" is college -- you have to take copious notes in class, do all the reading, and join a study group (*ahem Lost Diary) or risk failing.

I give tonight's episode a B-. The episode before a season finale is supposed to get me excited for the finale. That is tripled when it's a series finale and trillioned (made up word) when it's the series finale of "Lost." I only give this a B- because while I am still super excited for Sunday, this episode didn't ratchet that up a notch, but it didn't take it down a level either. This episode simply held down the fort.