Dare we say ... we told you so. Howard Stern just signed on with "America's Got Talent."

The King of All Media will replace Piers Morgan, much to the chagrin of those folks at the Parents Television Council, which felt he was too raunchy for primetime.

And producers wanted Stern so bad, they've even agreed to move 'AGT' to NYC -- so Howard can continue working on his radio show.

Fact is ... as we've been saying, Stern is a smart dude who knows his audience and when he should push the limits.

Bottom line -- AGT could become the biggest show on TV.

6:32 AM PST -- Howie Mandel is fired up about his new co-star ... telling TMZ, "I couldn't be happier. As my Mom always says, you can never have enough Howies." 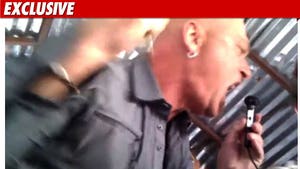 Howie Mandel -- Out of His Clucking Mind