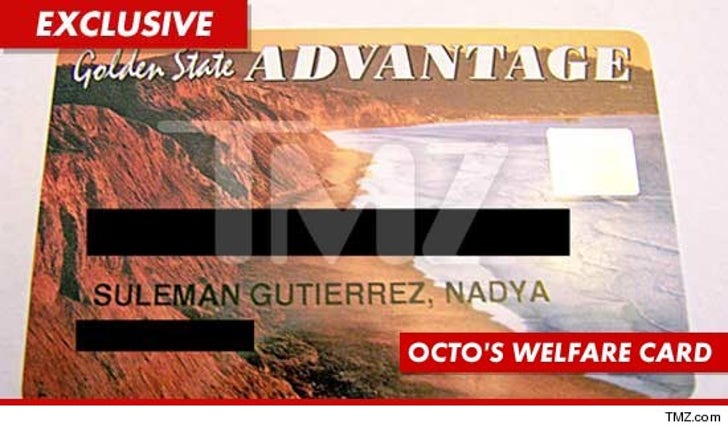 Octomom is doing what she swore she would never do -- go on welfare ... TMZ has learned.

The mother of 14 is getting $2,000 a month from the State of California. The money is deposited directly into a special debit card account (see above). The card can ONLY be used for food -- and it's closely monitored by the State to make sure the cardholder isn't making illegal purchases -- i.e., buying a bike at Costco.

It's a cruel twist, for a woman who vowed in 2010 -- a year after giving birth to octuplets -- she would NEVER go on welfare, saying she refused to become "a self-fulfilling prophecy" by accepting government assistance.

Octo qualified for the card because her income is less than $119,000 a year ... and a family of 15 that makes less than that amount is entitled to welfare benefits.

In case you're wondering, the $119,000 figure is based on an average of just under $8,000 for each member of the household. The more kids, the more you can make and still receive welfare.

We’re told the cash-strapped mom has taken her children out of private school, except for her one son who has autism, saving her $4,000 a month. And as we first reported, she's even posing topless to make ends meet. But it just wasn't enough.

It's a sad story, but one we saw coming from a mile away.