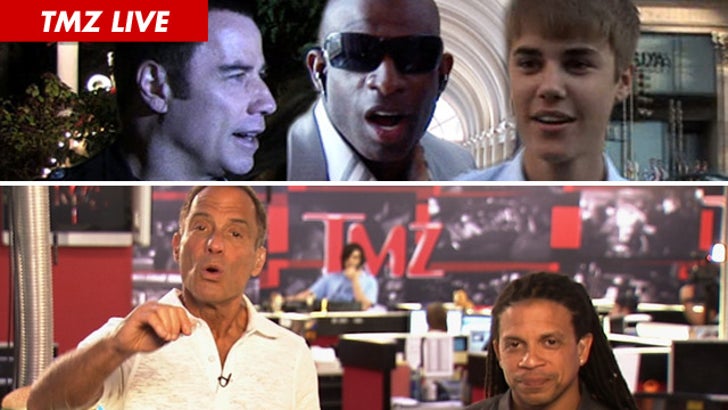 John Travolta's mounting his defense against two masseurs accusing him of sexual battery. We have breaking details -- including what Travolta's camp calls the most ridiculous part of the lawsuit.
Plus, NFL Hall of Famer Deion Sanders calls in with a blow-by-blow on his war with estranged wife Pilar Sanders -- and wait till you hear what she did for $100,000 ... according to Deion!! And does Justin Bieber really need a high school diploma?

(0:00) John Travolta accused of sexually harassing two men -- but something doesn't quite add up about the cases.
(3:15) Something about George Clooney's mega-fundraiser for President Obama is being kept top secret ... the food being cooked by Wolfgang Puck.
(8:15) Michael Jackson's former bodyguard makes insane allegations that MJ put a hit out on his brother Randy ... but this isn't the first, second or third crazy allegation he's made about MJ.
(10:40) Deion Sanders calls in to set the record straight about his nuclear divorce war with Pilar. You gotta see this.
(19:25) Breaking news -- John Travolta's lawyer fires back at his accusers.
(23:10) "The Avengers" sparks sales in ... schwarma?!?
(26:05) Christina Aguilera can't stopping ripping a contestant on "The Voice" ... who just so happened to a Mouseketeer with her back in the day. Harvey chalks it up to great producing.
(30:12) Justin Bieber graduates high school -- so it begs the question ... if you had $60 mil, would you even bother?
(35:33) There's a crazy show on TV called "Bait Car" -- in which cops leave a car with the doors open and the keys left in it and wait for people to steal it. Is it entrapment?
(41:30) The Kardashian's driveway looks like an exotic car show -- this can't be a good lesson for the teenage Jenners.
(43:20) We take your calls!