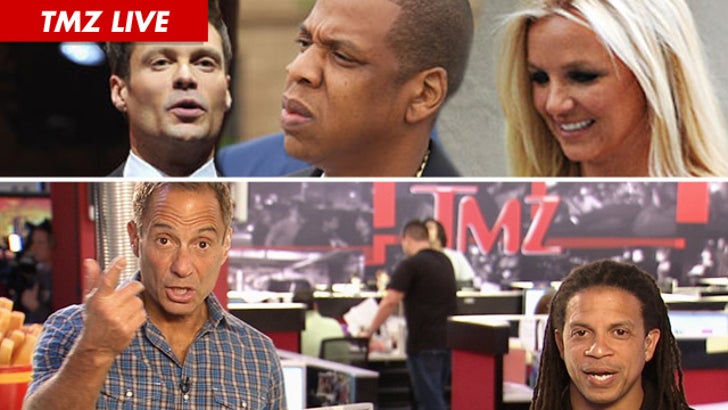 Ryan Seacrest just dropped nearly $49 MILLION to buy Ellen Degeneres' mega-mansion. So why spend that much dough? It's all Simon Cowell's fault ... maybe. You gotta hear this theory.
Plus, Jay-Z announces he supports gay marriage ... and trumps President Obama at the same time. Also, a super "handsome" celeb lawsuit, and Britney Spears' nerve-racked intro to "The X Factor" -- bad omen?

(0:00) Get ready to hate Ryan Seacrest -- because we found out he's buying Ellen DeGeneres' sprawling Beverly Hills mansion ... for the low, low price of $49 million.
(6:25) Britney Spears seemed really nervous when introduced as a new "X Factor" judge ... can she hold it together for an entire season?
(10:30) Howard Stern's big "Talent" debut was last night -- and it was awesome.
(14:50) The big debate of the day -- who's more influential in supporting gay rights ... President Obama or Jay-Z?
(19:00) "Battleship" director Peter Berg rips into an Israeli journalist for possibly dodging the draft ... and it's hilarious ... for everyone but the journalist.
(22:35) Usher's nasty divorce battle ... still getting nastier.
(24:30) Kanye West WILL be seen on "Keeping up with the Kardashians" -- how could this possibly be good for his image?
(28:45) Octomom screwed up when she filed for bankruptcy ... blow us over with a feather.
(30:30) Bret Michaels finally settled the lawsuit he filed after his face was smashed during a performance at The Tonys.
(33:45) Lady Gaga -- another day, another meat dress.
(35:20) "Trading Spaces" host Carl Oosterhouse filed one of the silliest written lawsuits we've ever seen.
(37:20) John Travolta's first accuser backs down ... so one down, two to go.
(39:50) We take your calls!