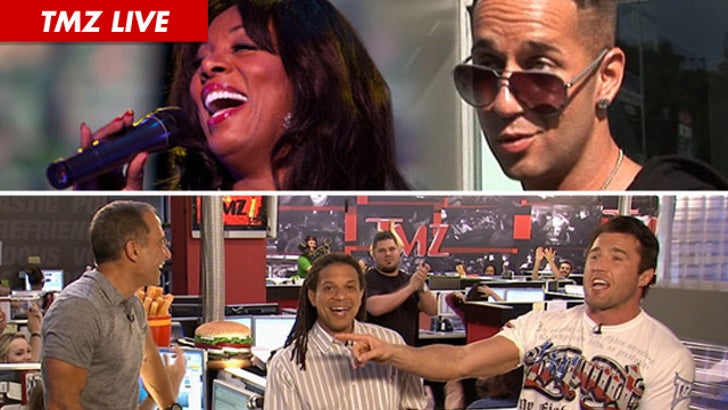 (0:00) Disco queen Donna Summer died this morning after a battle with lung cancer -- Harvey and Charles look back at her amazing career ... and all her classic hits.
(7:20) Deney Terrio from "Dance Fever" calls in to talk about the time he spent with Donna ... and drops a bombshell about her in the process.
(12:20) Two men who accused John Travolta have withdrawn their lawsuits ... but it's not as it seems. Turns out they're just upgrading their legal team.
(16:30) Sober The Situation will be on "Jersey Shore" next season with pregnant Snooki ... how will this affect the show?
(20:20) YOU GOTTA SEE THIS ... UFC badass Chael Sonnen joins Harvey and Charles to talk about fighting Anderson Silva, his past in politics, being convicted of money laundering, his steroid scandal, and much more ... like ripping vegans apart.
(27:10) Gloria Gayner calls in to talk about Donna Summer ... and says there was no rivalry at all between them.
(29:30) Watch out ... the Kardashians have successfully invaded the world of hip hop.
(33:30) Lane Garrison -- the guy from "Prison Break" -- is teaching acting to prisoners.
(35:35) Bobby Brown -- cashing in on Whitney's death.
(38:10) Were the jurors in William Balfour's murder cased biased because of Jennifer Hudson's fame?
(41:40) Ryan Seacrest actually got a great deal when buying Ellen's mega-mansion ... despite paying nearly $40 mil for it.