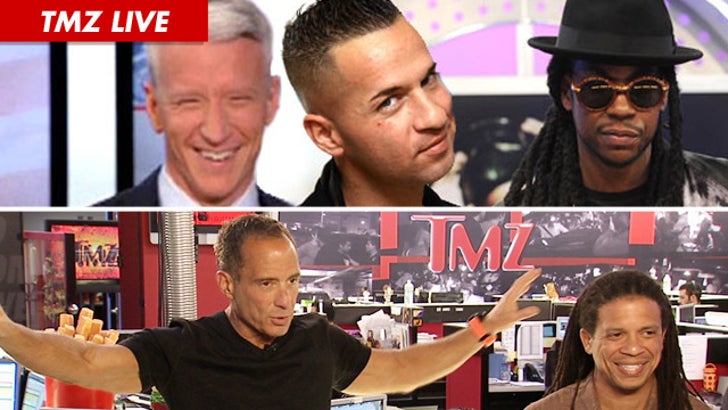 Anderson Cooper deserves serious props for absolutely crushing England's so-called "Barbie Mom" -- and we LOVE the way he did it. But it leads to a great question: why don't more talk show hosts do this??
Plus, Situation claims he never had an alcohol problem -- and he's ready to start boozing again on "Jersey Shore." Smell like a disaster to you? Also, rapper 2 Chainz -- arrested by TSA for flashing a 4-finger ring! Umm ... things are about to get all racial up in this newsroom.

(0:00) Anderson Cooper welcomes the plastic surgery-pushing "Barbie Mom" to his show... and kicks her right off!
(5:22) CBS sues ABC over a new reality show they think is too close to 'Big Brother,' leaving us asking: Is ANYTHING on reality TV original?
(8:01) A stunt extra from 'Transformers 3' involved in a horrific accident receives a MASSIVE settlement from the studio.
(10:22) Dr. Oz comes clean on his infamous "noodle" photograph.
(12:24) Controversy on 'American Idol' after Phillip Phillips' performance last night, but we have proof it was much ado about nothing.
(18:17) Rapper 2 Chainz gets arrested with brass knuckles at the airport, reminding us to ALWAYS read warning labels.
(25:52) The Situation breaks the silence on his stint in rehab... but we're calling radishes on his explanation.
(28:50) Will Smith tells David Letterman why he slapped the crap out of a kissy reporter.
(30:26) James Bond is changing his signature drink order from a martini to... a Heinie?
(33:15) Prince Charles takes a new hobby for a spin, but we think he should've stayed home with Mum.
(35:17) A San Francisco politician is channeling legendary activist Harvey Milk... but his methods sound a little crazy, even for us here in LA!