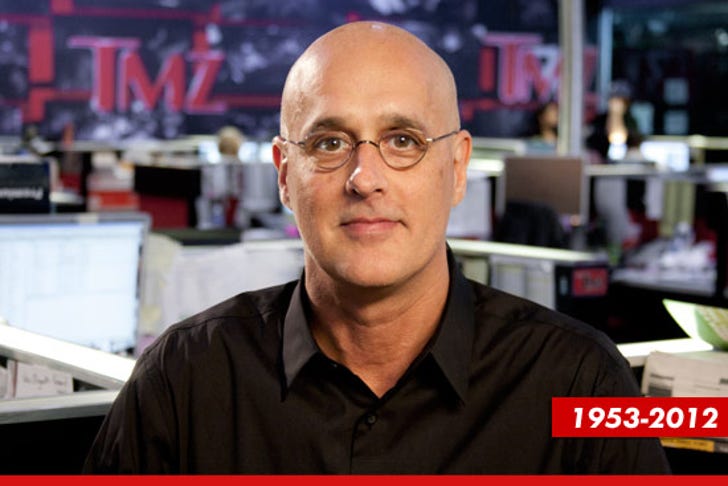 Jim Paratore -- the man who founded TMZ and created a slew of hit shows including "Ellen" and "Rosie" -- died of an apparent heart attack Tuesday during a bike trip in France.

Jim was President of Telepictures -- a division of Warner Bros. -- when he dreamed up the idea of getting into the digital business back in 2006. Jim and Harvey developed the concept of TMZ ... and Jim sold it to the big wigs, which was no small feat.

Jim was a driving force behind TMZ.com and then was critical in creating the TMZ television show.

Jim was a huge force in the TV business. After Ellen DeGeneres came out, no one wanted to take a chance on her. Jim recognized her great talent and literally went station to station across the country and convinced very nervous and reluctant general managers that they should take a chance on her -- that she was a talent who could connect with and touch everyone ... and Jim was right.

My friend, producer and champion Jim Paratore died today. He gave me a chance when no one else would. I love you, Jim.

Jim was a triple threat -- an amazingly creative guy who never let convention get in the way of a good idea. He was also a great producer who could execute the ideas that were in his head. And he was the best salesman in the world -- Jim could convince anyone of anything.

His list of credits is endless. On his watch, a slew of shows were produced, including "The People's Court," "The Bachelor," "Extra," "Judge Mathis" and on and on.

He was also hilarious.

Jim is survived by his wife, Jill Wickert, and his daughter, Martinique Paratore.

Everyone at TMZ was touched by Jim's brilliance and the loss is great and painful.